Reeza Hendricks made 66, his second straight half-century, and captain JP Duminy hit 34 not out off 14 deliveries as South Africa finished the innings strongly.

Johannesburg: Dwaine Pretorius took advantage of a promotion in the South African batting order with a power-packed innings in the third and final Twenty20 international against Sri Lanka at the Wanderers Stadium on Sunday. (South Africa vs Sri Lanka, 3rd T20I: SCORECARD)

Allrounder Pretorius hit 77 not out off 42 balls at number three as South Africa made 198 for two after being sent in. Reeza Hendricks made 66, his second straight half-century, and captain JP Duminy hit 34 not out off 14 deliveries as South Africa finished the innings strongly.

South Africa have already taken the series after winning the first two matches.

Duminy said at the toss that Pretorius had been moved up three because of limited opportunities to bat in previous matches. “It was a good surprise and I am just happy it came off,” Pretorius told SuperSport television as he left the field.

Pretorius, who hit seven fours and three sixes, shared a second-wicket stand of 90 with Hendricks and a rapid unbeaten 71 in the last five overs with Duminy.

Hendricks, who made 65 in the second match in Centurion on Friday, started slowly but picked up the pace to make his 66 off 52 balls with eight fours and two sixes. 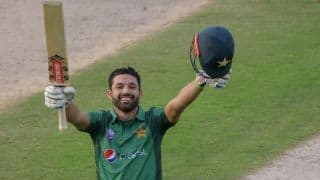