(Can West Indies bounce back after a defeat in the first ODI against South Africa. Catch all the live cricket scores here)

That’s the kind off result we all expected after the first innings, which was put together by two special batting efforts and one superhuman batting effort. The West Indians have a lot to learn and with the ICC World Cup 2015, just a month-and-a-half away, they may not have enough time to rectify the weaknesses.

The target has gone out of reach of the West Indies. They tried to put up a brave face but simply couldn’t keep up with the required runrate. The asking rate has now crept up to more than 20, they now need more than a miracle, they need an AB de Villiers.

West Indies started off well, with Gayle showing promise for a big innings. But Morne Morkel got his wicket before he could cause any real damage. Half the match won for South Africa here. West Indies are going to find it extremely daunting.

AB de Villiers smashed a magnificent 31-ball century, sending the ball on a trip to all corners off the park! Hashim Amla and Rilee Rossouw were very good too, but de Villiers’ effort towered over theirs. De Villiers finally got out on 149 off 144 balls to Andre Russell on the second ball of the last over.

Corey Anderson’s record has come to an end at the hands of AB de Villiers and in emphatic style. He got to his hundred of a six in the 31st delivery he played. Sixes have rained poured down. De Villiers has been phenomenal!

West Indies finally picked a wicket in the 39th over. But that may not have been so much of a blessing as de Villiers has come out and has played all the destructive shots in the book. He’s putting every second ball out of the park.

The South African openers have eased themselves to centuries. Rilee Rossouw’s maiden hundred, this and a timely one too as he has been struggling with bad form. Not the first for his partner though. 18th ODI hundred for Hashim Amla. South Africa have passed 200 in the process. They will look to accelerate now.

The toil for the West Indian bowlers has grown tougher with each passing over, but they have not reaped any reward. South Africa have escaped a few close chances, but that’s about it. They’ve been completely at ease otherwise. South Africans are headed for a big total.

West Indies 291/7 | Overs 50
Darren Sammy 25(41) Jason Holder 21(25)
So its all over. Formalities have been completed to make way for the inevitable. South Africa have won convincingly by 148 runs. South African bowlers had a huge target to play with and it didn’t take too much to defend it.
West Indies 274/7 | Overs 46
Darren Sammy 22(31) Jason Holder 8(11)
Looks like, West Indies are pushing for at least a total of 300. That will save them a some face in a match where they’ve been totally dominated by one man in particular — does he even need to be named now?
West Indies 257/7 | Overs 42
Darren Sammy 13(18) Jason Holder 0(1)
West Indies crumbling to a huge defeat here. Denesh Ramdin played well for his 57 off 55 but quite inconsequential in context of the match.
Denesh Ramdin 57 (55) c du Plessis b Morkel
West Indies 237/6 | Overs 39
Denesh Ramdin 52(48) Darren Sammy 3(7)
No hopes remain for West Indies, but they’ve put up a brave face. They have attempted to stage a noteworthy fightback, but the target has proven too daunting.
Andre Russell c du Plessis b Imran Tahir
West Indies 148/4 | Overs 25
Denesh Ramdin 12(11)
Another bites the dust. The match is slowly slipping from extremely tough to near-impossible for West Indies.
Marlon Samuels 40(48) c Behardien b Philander
West Indies 122/3 | Overs 21.2
Marlon Samuels 27(36)
West Indies attempting to up the scoring rate and as they do that Dwayne Smith falls. South Africa still untroubled, however. The required rate has crept up to more than 10.5
Dwayne Smith 64(65) c Duminy b Behardien
West Indies 93/2 | Overs 17
Dwayne Smith 51(53), Marlon Samuels 12(23)
In context of this chase, the West Indians are going to slow right now. They’re exercising caution to avoid further wicket loss, but if they continue at this rate, the match will be lost badly anyway.
West Indies 76/2 | Overs 12
Dwayne Smith 43(40), Marlon Samuels 5(6)
West Indies need quick runs, very quick runs. Marlon Samuels is capable of big hits and so is Dwayne Smith but the task at hand is very daunting
West Indies 63/2 | Overs 10
Dwayne Smith 36(33), Marlon Samuels 0(3)
Leon Johnson’s miserable stay at the crease has been ended by Vernon Philander with a good length in-swinging delivery. West Indies barely stand a chance now. Marlon Samuels walks in.
Leon Johnson lbw Philander
West Indies 54/1 | Overs 9
Dwayne Smith 27(30), Leon Johnson 1(13)
The West Indian struggle with the bowl has spilled over into their batting too it appears. After the wicket of Gayle, they’ve slowed down badly. Leon Johnson has struggled.
West Indies 36/1 | Overs 5
Dwayne Smith 13(18), Leon Johnson 0(1)
Morkel gets the big wicket of Chris Gayle. Unquestionably, Gayle had the best chance of leading the chase. Leon Johnson walks out to the crease.
Out! Chris Gayle c Behardien b Morkel
West Indies 20/0 | Overs 3.0
Chris Gayle 6(7), Dwayne Smith 11(13)
West Indies have started off pretty well. Morne Morkel did get Dwayne’s Smith only to find out that he’d bowled a no-ball. West Indies need to continue in this vein if they have to get close.

Toss: West Indies win the toss and elect to field.

Hello and welcome to CricketCountry’s coverage of the second One-Day International (ODI) between South Africa and West Indies at the New Wanderers Stadium in Johannesburg. We will bring you the live updates from the match.

Not a single West Indian batsman managed to get to a half-century. Chris Gayle was the closest to getting one, but got dismissed nine short, playing 24 deliveries. Denesh Ramdin, was the next highest run-scorer with 31 off 32 balls. The West Indian performance with the bat was a disgrace apart from that. 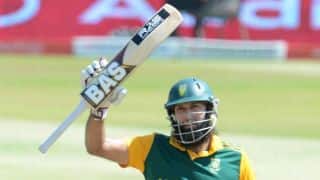