Currently, West Indies are 100 for the loss of six wickets with Kieron Pollard batting on seven.

West Indies batsman, Andre Russell was dismissed for 12 by Wayne Parnell after being caught off Justin Ontong during the third and final T20I against South Africa at the Kingsmead Stadium in Durban on Wednesday. Currently, West Indies are 100 for the loss of six wickets with Kieron Pollard batting on seven and Darren Sammy making his way in. West Indies need 196 runs to win as the target. 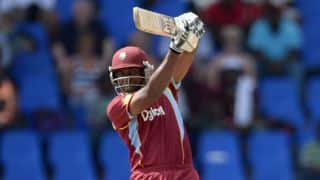