South Africa would be the favourites for the second ODI as they face an unsettled West Indies ODI unit.

West Indies have already spent a gruelling one month in South Africa and have managed to win the T20I series after they lost the Test series to the host nation. But the start to the most crucial five-match One- Day International (ODI) series was not a likeable one for the West Indies as they were thrashed by South Africa by 61 runs in a game which was disturbed by sessions of baffling rain delays.

In the second essay of the ODI series, the touring nation will meet the hosts at New Wanderers Stadium in Johannesburg. Both the teams will be relived watching the weather predictions which indicate a bright sunny day at Wanderers putting aside the unnecessary delays.

West Indies don’t have an appealing record playing at Johannesburg as they only managed to win two out of the eight matches they have played on the ground. The last time the West Indies won the match at Wanderers was in 1993 when they defeated Pakistan by five wickets. The West Indies would like to create better memories at the Wanderers and also would love to win their first ODI of 2015. In the first ODI played at Durban, the West Indies played under the captaincy of Jason Holder who was recently appointed the captain of the side for the ICC Cricket World Cup 2015.

Holder’s first outing as the leader of a team which came to the ODI grind after controversy-ridden India tour. However, with the four more ODIs pending, he would like to put in serious efforts into the next couple of games to give the West Indies a serious chance at the ICC World Cup 2015. In the Durban tie, Leon Johnson who was drafted in to bat at No. 3 couldn’t make much of the opportunity as he was out for nought. He might be replaced by Lendl Simmons who was not included in the side for the first ODI. It would be another crucial test for the West Indies team without Dwayne Bravo and Kieron Pollard missing from the ranks.

South Africa on the other hand, showed a better resolve playing the 50-over format of the game. Coming from a series 2-1 series loss to West Indies in the 20-over format, they looked brave.. In the first ODI, there were notable performances from both the batsmen and the bowlers. JP Duminy, who returned to the ODI circuit after returning from knee injury couldn’t make much of the opportunity. He would be surely in focus in the second ODI with the bat. AB de Villiers did the job behind the wickets for the first ODI but it would be interesting to see if he continues to do the job or Rilee Rossouw or even Morne van Wyk could do the job. South Africa would be the favourites for the second ODI as they face an unsettled West Indies ODI unit. 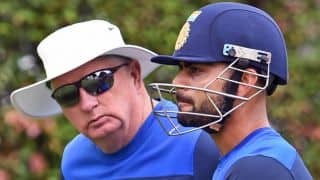