The batsman featured in the highest List A partnership last week to boost his confidence.

Dropped from South Africa‘s ODI squad for the current home series against Sri Lanka, the opener Aiden Markram says that selection is not in his hands and that all he can do is keep scoring runs.

Speaking to ESPNcricinfo over the weekend after he combined with Titans team-mate Farhaan Behardien to put on a record List A partnership of 272, Markram stated that his focus was winning games for his domestic franchise. (READ: 1st ODI: Imran Tahir, Faf du Plessis power South African win)

“As players, we can’t control selections. All we can control is the weight of big runs, and putting runs on the board,” said the 24-year-old. “I’m trying to invest all my time and energy into the Titans team, and whatever happens from there, we just take it in our stride day by day.”

While a regular in South Africa’s Test team, Markram was omitted from South Africa’s ODI squad last week after he was recalled in January. He did not get a game against Pakistan. His last ODIs were in Australia in November, when he made 36, 19 and 32. In 16 career ODIs, Markram averages 25.43.

He was named captain of South Africa’s ODI team in early 2018 and oversaw the 1-5 series loss to India at home.

Markram has hit two hundreds in three days during the domestic One Day Cup – on Friday he hammered 169 off 129 balls against Cape Cobras and on Sunday he hit 139 from 127 balls. That 169 came after Titans fell to 31/5 and with Behardien, powered them to 320/6.

“It was an interesting day,” he said. “An innings of two halves, especially in the first innings. They bowled really well up front, and made it tough for us to score as well as striking. It was really tough up front, but nice to reap the rewards at the back.” 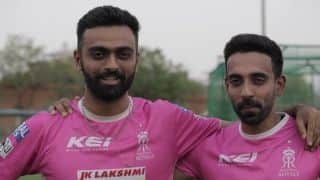