Powar, the former India off-spinner, who was played 31 ODIs and two Tests, said he has been focussing a lot on the spinners.

India women s cricket team head coach Ramesh Powar feels that his spinners will be their strength during the ICC Women s World T20. India kickstart the tournament in the Caribbean against New Zealand on Friday.

The spinners are our strength going into the World Cup. If our spinners click, everything will be fine. Obviously, batting too is our strength. But the moment our spinners chip in, we win it very easily, so my job is to look after the spinners from day one, Powar, who was appointed as coach after Tushar Arothe was unceremoniously sacked from his position in August, told FirstPost on Wednesday.

Powar, the former India off-spinner, who was played 31 ODIs and two Tests, said he has been focussing a lot on the spinners in his side.

I try and spend a lot of time with the spinners because you have to create the self-belief in them that they can win us the game rather than just the batters because it’s been said over and over again, that batters win us the game. But I think it’s both the groups that win us the games, he said.

Powar, who has served as spin consultant to Cricket Australia this year, believes that a blend of youth and experience will help India in the 11-team tournament.

Experience and the youth are the strengths of this team. The way they have gelled is the most important thing for us as a support staff. The strength is that they are playing for each other, enjoying their performances and they are happy with what they are doing, Powar, whose contract expires after the tournament, said.

Meanwhile, in the batting department, India look settled, but Powar reckons power hitting is still an area of concern.

We’ve changed our batting order in such a way that we get depth in our batting. We basically open with Mithali Raj and Smriti Mandhana. Jemimah Rodrigues bats at three, Tanya Bhatia is four, Anuja Patil is five, so these five girls address first 10 overs.

Then we have Harmanpreet Kaur, Veda Krishnamurthy, Pooja Vastrakar, Radha Yadav and Deepti Sharma these five address last 10 overs. There are 10 players who can bat. So, we have planned in such a way that the pressure is less on the batting unit.

Honestly, power hitting doesn’t come overnight. There are some players like Harmanpreet, Mithali, Smriti who can clear the ground. But it takes time, it takes some learning to do power hitting.

Another area Powar feels India need to improve on, is their fitness. We are not the fittest side in the world. And they are naive to fitness things, so we will try and get those things going in future. It will take some time. If we can take the fitness level two notches up, then it will help us, he said.

However, India s skills and mental toughness will be their biggest asset at the main event.

Skills and mental toughness. That’s what is important for me. Because when you get hit for a six, the next ball will tell me how good you are. That is mental strength. That’s what we worked on, he said.

We don’t criticise our players, we try and tell them that if you get hit or get out, we are looking at the comebacks rather than just your skills. That’s what the main focus is on. 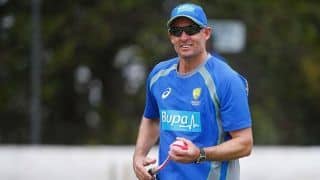 Need to show patience with players than chopping and changing too much: Mike Hussey