Sri Lanka have included a couple of new faces for the ODI series against Australia.

Sri Lanka have announced their squad for the first two matches of the upcoming five-match one-Day International (ODI) series against Australia, beginning from August 21. Tillakaratne Dilshan returns to the squad and Sri Lanka have also included 18-year-old  Avishka Fernando and left-arm spinner Amila Aponso, who have been included in the squad for the very first time.  All-rounders Milinda Siriwardena Thisara Perera and Fervez Maharoof have also been included in the team after they were axed for the ODI series against England. Dasun Shanaka, Chaminda Bandara and Suraj Randiv has been however excluded. Senior campaigner Tillakaratne Dilshan finds his name on in the squad after missing out on the England tour due to personal reasons. FULL CRICKET SCORECARD: Sri Lanka vs Australia, 1st ODI at Colombo (RPS)

Fernando scored back-to-back hundreds for Sri Lanka Under-19 side against England his side to a whitewash. Aponso on the other hand picked up 13 wickets against South Africa Emerging XI in a four-day game. He has picked up 111 wickets in 27 First-Class matches and has an economy of 3.78 in List A matches.  After an impressive show in the Test series chinaman bowler Lakshan Sandakan has also been included in the squad. He was part of the Sri Lankan ODI squad in a home series against England, but did not get a game, according to espncricinfo.com. READ: Mitchell Marsh withdraws from ODI series vs Sri Lanka

Sri Lanka claimed a 3-0 whitewash of Australia recently. They will hope that the Angelo Mathews-led team will perform equally well in the shorter format as well. Australia are the world champions and will look to bounce back well after a disappointing Test series. 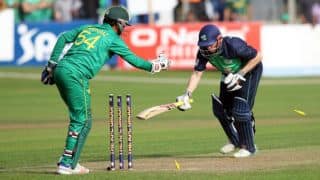