Sri Lanka defended a 166-run target against South Africa in a Group 1 match in World T20.

Sri Lanka clinched a five-run thriller against South Africa in the ICC World T20 2014 at Chittagong on March 22. They defended a 166-run target in a Group 1 clash in the T20 World Cup. Sri Lanka kept taking wickets at regular intervals and that helped them to pip South Africa at the post.

De Kock and Hashim Amla began the run-chase for South Africa. De Kock scored the first boundary in South Africa’s innings in the second over. Angelo Mathews bowled one short and wide and de Kock cut that in front of point for a four. In the third over bowled by Kulasekara, de Kock let loose. First he drove a length delivery over wide mid-on for a four.

Kulasekara then bowled one on the pads and de Kock went down on one knee and smashed it over the deep square-leg boundary for a six. The next ball was full and wide and de Kock came forward and struck it through cover for a four. Senanayake was brought into the attack in the fourth over, but de Kock hit a short and wide delivery through cover-point for a four.

Malinga was then brought into the attack in the fifth over and he struck immediately with a darting yorker that broke de Kock’s defence. Amla hit his first boundary in the sixth over bowled by Mathews. He walked across his stumps and flicked a length delivery over short fine-leg for a four. The seventh and eighth over did not yield any boundaries.

Thisara Perera then relieved some pressure with a half-volley outside off-stump. Duminy drove on the up through long-on for a four. Thisara Perera bowled a similar delivery and Duminy hit the ball for a one-bounce four through long-on. Duminy then premeditated a scoop shot and flicked the the last ball behind the wicketkeeper for a six.

Ajantha Mendis came into bowl in the 10th over and Duminy greeted him with a lofted drive down the ground for a four. The next ball was struck for a six over wide long-on. Amla came down the track to Senanayake and hit one through long-off for a four. But Senanayake struck as Amla mishit one to Tillakaratne Dilshan at short cover. He was out for 23 off 26 deliveries.

That brought AB de Villiers into the middle. He moved to the leg side to Mendis and drove one in the air over cover for a four. Malinga was brought back into the attack in the 12th over and his first delivery was a full-toss, which de Villiers hit behind square on the leg side for a four. De Villiers the smashed a full delivery from Kulasekara past mid-off for a four.

But Kulasekara struck by getting the outside-edge on the next ball. Kumar Sangakkara took the catch and de Villiers was out for 24 off 16 deliveries. At the time, South Africa were at 110 for three after 14 overs. That brought David Miller to bat. But Duminy departed in the 16th over to Senanayake.

Duminy tried to launch one over deep mid-wicket, but did not get enough distance and Dilshan took the catch right at boundary. Duminy was out for 39 off 30 deliveries. Albie Morkel was the next batsman in and he struck slog-sweeps for sixes in-a-row against Mendis in the 17th over. He went for a similar shot on the next delivery but was caught by Dinesh Chandimal in the deep at wide long-on.

Miller then drove a full delivery from Malinga through extra-cover for his first four in the 18th over. It got to a situation where South Africa needed 19 runs from two overs. Kulasekara bowled the 19th over. Farhaan Behardien gave a catch to Mahela Jayawardene at long-on for five runs. Kulasekara gave away only four reasons in that over.

South Africa needed 15 runs of the last over to be bowled by Malinga. Dale Steyn got run out on the first ball for two runs as Miller sent him back after hitting one to mid-wicket. Miller then got run out on the next delivery as he struck one down the ground and looked for his second run. He was dismissed for 19. Imran Tahir hit the last ball for a six, but it was too little, too late.

Earlier, Sri Lanka captain Chandimal had won the toss and elected to bat first. They posted 165 for seven in their 20 overs. Kusal Perera top-scored with a 40-ball 61 with six fours and three sixes. Mathews was the next top-scorer with 43 runs. Tahir was the pick of the bowlers with three wickets. Steyn and Morne Morkel took two wickets each.

The total looked a competitive one and Sri Lanka would be delighted to get a victory in their first match in Group 1, which also comprises England, New Zealand and the Netherlands. Kusal Perera was the Man of the Match for his belligerent innings. 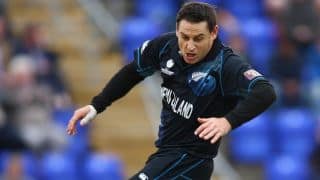