The first cricket Test between Pakistan and Sri Lanka ended in a draw at Abu Dhabi stadium on Saturday after Kumar Sangakkara hit a match-saving 211 in his team s total of 483. 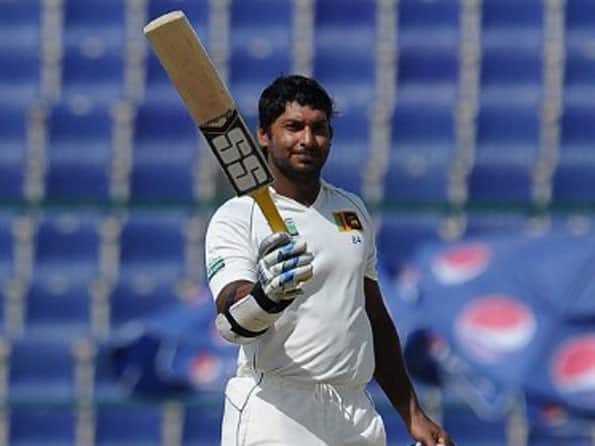 The first cricket Test between Pakistan and Sri Lanka ended in a draw at Abu Dhabi stadium on Saturday after Kumar Sangakkara hit a match-saving 211 in his team s total of 483.

Sangakkara scored 211 during a marathon near eleven-hour stay while Prasanna made 120, for his fourth century, as Sri Lanka piled on 483 to frustrate Pakistan on the fifth and final day at Abu Dhabi stadium.

Sangakkara finally fell in the last over before tea, when he was trapped leg-before by the part-time leg-spinner Azhar Ali for his first wicket in Test cricket but not before he had frustrated Pakistan for almost two sessions.

Sangakkara batted for 651 minutes, faced 431 deliveries and hit 18 boundaries during an epic knock.

With just 25 overs remaining and the match heading towards a draw, Prasanna fell caught behind off paceman Aizaz Cheema but by that time he and Sangakkara had changed the course of the match.

Sangakkara flicked Cheema to fine-leg for his 18th boundary to reach his double hundred after 604 minutes of defiant batting, punching the air in delight.

Together with Prasanna, Sangakkara added 201 for the sixth wicket stand, erasing the previous best of 169 in Pakistan-Sri Lanka Tests for this wicket between Kamran Akmal and Yasir Arafat at Karachi two years ago.

Sangakkara, 33, has also achieved a personal landmark by scoring a double hundred as he is now third behind Sir Donald Bradman (12) and West Indian Brian Lara (nine) in terms of scoring Test double hundreds.

“It was nice to bat under pressure and get us out of the hole,” said a delighted Sangakkara afterwards. “Prasanna batted equally well as he came out with the second new ball and batted brilliantly.”

“They are a good team and showed that wonderfully by their effort and full marks to Sangakkara and Prasanna, but we let down quite a few chances which we needed to improve upon,” he said.

Misbah tried every track in the book but the Sangakkara-Prasanna pair did not serve up any chances in the first three hours, and Prasanna reached his hundred with his 11th boundary, an uppish drive off spinner Saeed Ajmal.

In all Prasanna hit 12 boundaries during his 273-ball knock.

Resuming at 298-5 Sri Lanka survived the morning session unscathed as the overnight pair of Sangakkara and Prasanna kept Pakistan s three-pronged pace attack at bay to take their team to 364-5 at lunch.

Sangakkara, whose wicket was crucial for both Pakistan and Sri Lanka, then came into his own, and gave no chance to the bowlers as he hit Ajmal for an exquisite cover drive to the ropes.

Pakistan used all five bowlers but were left to rue the missed chances of Friday which spoiled their chances of taking the lead in the three-Test series.

The second Test starts in Dubai on October 26, while the third will be played in Sharjah from November 3. (AFP)