"The talks of the series are still in the preliminary stages, so it's too early to confirm it."

After having agreed to play a five-match One-Day International (ODI) series in India on a short notice post the West Indies pull-out, the Sri Lankan board is looking for a return in favour from the Board of Control for Cricket in India (BCCI)  in August next year by playing three Test matches in the island nation.

“We have already confirmed our participation in the five ODIs slated to held between November 1 and 14. And yes, we are now looking to host India for a three-Test series in August next year,” a Sri Lankan official told PTI.

“The talks of the series are still in the preliminary stages, so it’s too early to confirm it. But we are looking forward to host India,” he added. Originally, Sri Lanka were to tour India in August 2015 for a three-match Test series according to the amended Future Tours Programme, but now SLC wants to reverse the hosting.

SLC is also expected to make around USD eight million by hosting the three Tests against India. There has been no word from the Indian board, which will only take the next course of action in the emergency meeting of the working meeting slated to be held on Tuesday.

The meeting was scheduled after the West Indies team aborted its tour midway and returned home post the fourth ODI in Dharamsala following a long-standing pay dispute with West Indies Cricket Board and West Indies Players Association.

With the fifth and final ODI, one-off T20 and 3 Tests remaining to be played during the series, the venue officials of the respective grounds have requested a match in the upcoming Sri Lanka series. The BCCI will take a final call on the venues and the dates in the working committee meeting. 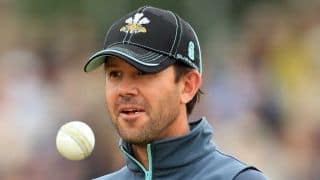 Ricky Ponting: Nothing counts when the World Cup starts