Sri Lanka set up an all-Asian final in Mumbai as they ended New Zealand s dream, brushing aside the opposition in a five-wicket semi-final success in Colombo. The win was set up in the field when Sri Lanka s bowlers kept New Zealand to 217 and then the batsmen knocked off the runs with 13 balls to go, overcoming a bit of nerves after a strong start. 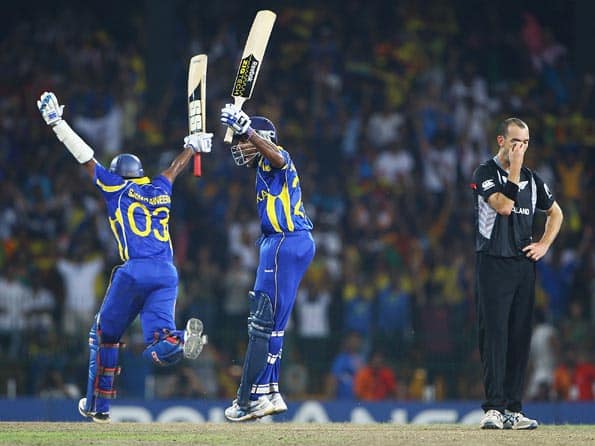 Sri Lanka set up an all-Asian final in Mumbai as they ended New Zealand s dream, brushing aside the opposition in a five-wicket semi-final success in Colombo. The win was set up in the field when Sri Lanka s bowlers kept New Zealand to 217 and then the batsmen knocked off the runs with 13 balls to go, overcoming a bit of nerves after a strong start. Sri Lanka will enter the World Cup final for the third time, while New Zealand have failed to reach the summit for a sixth.

Having first use of the surface, New Zealand failed to flex their muscles against a tidy attack. The top order struggled to build dominant partnerships as Sri Lanka repeatedly halted their progress. Brendon McCullum was bowled by Rangana Herath in the eighth over with 32 on the board, Jesse Ryder edged an attempted cut off Muttiah Muralitharan, and Lasith Malinga came back into the attack and thudded a yorker into the base of Martin Guptill s stumps.

Although 84 for three was a tricky spot for New Zealand to be in, Scott Styris and Ross Taylor batted with a sureness missing in the opening pair. Styris was busier and did not allow the spinners to settle against him, shuffling and cutting and sweeping the ball along the ground. He also hit Malinga out of the attack, driving handsomely past cover and midwicket.

When 77 had been added for the fourth wicket and New Zealand were threating to run away with the game, they again lost a wicket. Taylor had been struggling to force the pace and when he got a short ball from Ajantha Mendis his attempt to heave it off the park ended up in a catch to deep midwicket.

From 192 for four in the 43rd over, New Zealand folded spectacularly for 217 in 48.5. Malinga returned to snuff out Kane Williamson and Nathan McCullum and suddenly New Zealand needed Styris to marshal the end over as Williamson had done against South Africa. But with his final international delivery on Sri Lankan soil, Murali sent down a fizzing offbreak outside off and Styris premeditated clip to leg resulted in a loud lbw shout. The last four wickets fell for four runs, and New Zealand had massively disappointed.

From there on their only real chance of winning was to pick up quick wickets and run through the dominant Sri Lanka top order. But that did not happen as Upul Tharanga and Tillakaratne Dilshan put 40 on the board before the first wicket fell. Tharanga laced his way to a breezy 30 before Dilshan had his first boundary, and was excellently held at backward point by Ryder off Tim Southee.

Dilshan, not at his best but good enough to slap away deliveries to the boundary, and Kumar Sangakkara stitched together a stable partnership for the second wicket that put New Zealand out of the contest. There was no real dip in the scoring as the pair was able to punctuate tidy periods with boundaries almost at will; Sangakarra twice laced boundaries past cover while Dilshan pulled the harmless medium pace of Styris and Jacob Oram for four and six. The nerves showed when Guptill twice fumbled at cover to allow boundaries.

The pair was adept at picking off boundaries when the spinners erred even slightly in length. Dilshan used the depth of his crease expertly, either coming properly forward and driving or transferring his weight back to cut backward of square or heave over midwicket. When Daniel Vettori placed a short extra cover and short point, Dilshan expertly bisected the pair for four. Sangakkara was more comfortable coming forward, and sailed into the forties with an effortless pick-up six off Nathan McCullum.

When Dilshan fell for 73, slashing Southee to Ryder, it was very much against the run of play, but Sri Lanka already had 160 on the board. Even when Vettori removed Mahela Jayawardene for one and Sangakkara threw his wicket away with a steer to third man, there was enough batting to come to cover for a collapse. Chamara Silva s impetuous shot selection briefly dented the otherwise vocal crowd before Thilan Samaraweera collected 23 and a hobbling Angelo Mathews helped himself to 14.

New Zealand tried hard in the field and bowled purposely, but you had to concede that the better side won. Sri Lanka await the winner of tomorrow s cracker in Mohali.

Semi-final Preview: Pakistan takes on India in the match of the World Cup