Lasith Malinga last played an ODI for Sri Lanka in 2017 against India and was left out for the one-off T20I against South Africa in August.

The 16-member squad announced by the Sri Lanka Cricket Board (SLC) will be led by allrounder Angelo Mathews with Kusal Perera to take over the wicketkeeping duties after regular ‘keeper and opener Niroshan Dickwella was omitted from the squad. Dickwella, however, is on the standby list.

Malinga last played an ODI for Sri Lanka in 2017 against India and was left out for the one-off T20I against South Africa in August.

Danushka Gunathilaka areturns to the squad after serving his six-match suspension for breaching the ‘Player Code of Conduct and Contractual Obligation’.

Pacer Lahiru Kumara and left-arm spinner Lakshan Sandakan  failed to make it to the squad along with batsman Shehan Jayasuriya. All three were part of the Sri Lanka ODI squad for the recently concluded South Africa series. In the five ODIs against the Proteas, Dickwella managed to go past 50 only once as he made 158 runs at an average of 31.60.

Sandakan played just one match of the series, claiming 1/74 in his eight overs as South Africa beat Sri Lanka 3-2 in the series .

Aponso has been in good form in the SLC T20 League, claiming six wickets in four matches and was rewarded with a recall. The 25-year-old last played an ODI for Sri Lanka in June 2017 against Zimbabwe. 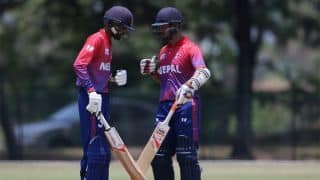