Angelo Mathews's team has been on the road since the start of the year.

A drained out Sri Lanka will be wary of a well rested but rusty Pakistan when both sides taken on each other in a two-Test series starting on Wednesday.  This series will be the last for former Sri Lankan captain Mahela Jayawardene, whose elegant batting has seen him rise to sixth place in the all-time scorers’ list with 11,671 runs in 147 Tests.

Rival captains Misbah-ul Haq of Pakistan and Angelo Mathews of Sri Lanka will look to put aside the emotions of a farewell series as they find themselves battling contrasting worries.

Mathews said his team has been on the road since the start of the year, touring the United Arab Emirates, Bangladesh and England for Test and limited-overs cricket before last month’s home series against South Africa.

He rued the absence of a cooling-off period as he announced, reports Sport24. Pakistan, he said, has a good rest whereas Sri Lanka has been playing continuous cricket, Mathews said.

Pakistan fought back to play out a 1-1 draw in their last Test series against Sri Lanka in the UAE in January, but have not won a series since beating England in 2012. Misbah said his team has been training for the series, and is determined to win their first series in Sri Lanka since 2006. 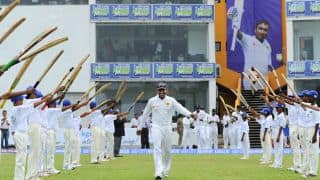