Sri Lanka handed South Africa an embarrassing 180-run defeat in the first One-Day International (ODI) in Colombo on Saturday. Chasing Sri Lanka’s 320 for five, the Proteas were bowled out for 140 in 31.5 overs at the R Premadasa. 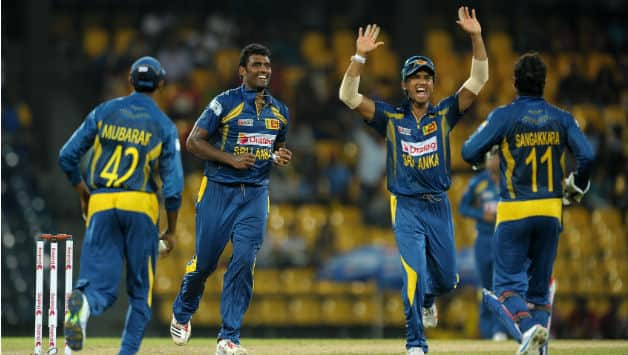 Sri Lanka handed South Africa an embarrassing 180-run defeat in the first One-Day International (ODI) in Colombo on Saturday. Chasing Sri Lanka’s 320 for five, the Proteas were bowled out for 140 in 31.5 overs at the R Premadasa.

The South Africans were blown away by a masterclass innings from Kumar Sangakkara (169 from 137 balls) and were never really in the running during their chase. They kept losing wickets at regular intervals and Sri Lanka took a 1-0 lead in the five-match ODI series.

Already chasing a an imposing 321-run target on a wicket that gives the bowlers some assistance, the South African chase began to the worst possible start as Colin Ingram was bowled by Lasith Malinga in the very first ball of the innings. It was all downhill from there.

Next to go was JP Duminy in the sixth over. Shaminda Eranga’s good length ball moved away from the left-handed Duminy and got the edge off his bat. The ball nearly fell to the floor, but Sangakkara dived forward to take the catch. The umpires asked for TV replays to check whether the wicketkeeper had taken the catch cleanly, but it was Sangakkara’s day and no one could deny him the catch.

Then captain AB de Villiers joined Alviro Petersen in the middle. The pair batted positively and looked like they would build a good platform. Sensing the mood stand-in captain Dinesh Chandimal brought in Rangana Herath. The left-arm spinner dismissed de Villiers in the third delivery of his very first over. The Proteas captain looked to play inside out to a turning delivery, but missed and the ball hit the top of off-stump.

Thisara Perera then put South Africa in more trouble as sent Petersen back into the dressing room. The batsman nicked an away moving short of a length delivery to Sangakkara behind the wickets. South Africa then lost their fifth wicket as their score was only 82 in the 17th over. Faf du Plessis drove on the up at a full and wide delivery outside off-stump, but failed to keep it down as Chandimal took a low catch at short cover.

David Miller and Robin Peterson added 21 runs for the sixth wicket. Tillakaratne Dilshan then accounted for Miller’s wicket as he chopped on a straight ball onto the stumps. From then on it was a procession as Sri Lanka picked up the last four wickets for under 40 runs to bring an end to South Africa’s misery.

The last wicket was of Aaron Phangiso’s. He stepped out of his crease to a flighted delivery by Herath and missed. Sangakkara finished the match as he coolly dislodged the bails to stump him out. Herath and Perera finished with three wickets apiece.

It was a comprehensive victory for Sri Lanka and South Africa’s second biggest ODI defeat by margin of runs.

Earlier, Sri Lanka posted a total of 320 for five in 50 overs thanks mainly due to Sangakkara’s personal best ODI score. His 16th ODI century was laced with 18 fours and six maximums. He began moderately, but scored freely as the innings progressed.

Sangakkara shared a 123-run partnership with Lahiru Thirimanne for the fourth wicket, scoring 100 runs himself. Sangakkara’s score was the second-highest individual score against South Africa in ODIs after Sachin Tendulkar’s 200 not out.

It was also the third highest ODI score by any Sri Lankan batsmen after Sanath Jayasuriya’s 189 and Tharanga’s unbeaten 174. Both these came against India.

The second ODI is also at the R Premadasa Stadium in Colombo on July 23. Chandimal is due to lead the side out again as regular captain Angelo Mathews is suspended for one more ODI.