The third day belonged to Bangladesh, hands down. A superlative show with the bat has earned them the Day 3 honours, but there is still a lot of cricket left in this Test. Both the teams will have to work very hard to get the favourable result.

Sri Lanka made a solid start to their second innings after Bangladesh took vital first innings lead on Day Three of the second Test at Colombo. At stumps, Sri Lanka were 54 for no loss, still trailing the visitors by 75 runs. Sri Lanka had scored 338 in the first innings and in reply, Bangladesh had posted 467 runs on the board. Hundred by Shakib Al Hasan and fifties by Mushfiqur Rahim, Soumya Sarkar and debutant Mosaddek Hossain propelled them to a 129-run lead. With two days play still left in the match, both teams have plenty to play for. The advantage, however, rests with Bangladesh for now. Full Cricket Scorecard: Bangladesh vs Sri Lanka, 2nd Test at Colombo

The visitors outplayed Rangana Herath and co. for most part of the third day. Resuming from 214 for 5, Shakib (116) and Mushfiqur (52) added 92 runs for the sixth wicket. Even after Mushfiqur s dismissal, the visitors did not concede the advantage as Mosaddek stepped up to the occasion, scoring a gritty half-century on Test debut. Mehedi Hasan also chipped in with a useful cameo towards the end. All this contributed to the all-important lead.

Shakib, who looked reckless on Day Two, was exactly opposite of it on Day Three. His knock was almost chanceless on the third day, as he put up a fine display of batsmanship. The southpaw not only held his end firmly, but also added runs at a brisk rate. He stitched two crucial partnerships with Mushfiqur and Mosaddek, with whom he added 131 runs for the seventh wicket, bringing up his fifth Test ton in the mantime.

Mosaddek looked every bit a special talent. The strokes he played were delightful to say the least. He made good use of his feet against Herath and looked completely at ease, with the experts calling him the future of Bangladesh cricket. Even after Shakib and Mehedi (24) deserted him, he continued to play sensible cricket. Mosaddek farmed the strike and hit a few lusty blows playing alongside No. 11 Subashis Roy, and added more runs to the lead.

For Sri Lanka, Lakshan Sandakan and Herath finished with four wickets each. Herath also got to the landmark of 1,000 First-Class wickets too in the process, thus becoming only the second Sri Lankan after Muttiah Muralitharan to achieve this feat. Suranga Lakmal picked up two wickets.

Trailing by 129 runs, Sri Lanka made a good start to their second innings, with Dimuth Karunaratne and Upul Tharanga remaining unbeaten on 25 each at stumps. Sri Lanka ended the day on 54 without loss, still 75 behind Bangladesh. Their openers have done well so far, but Day Four is going to be tough and will put their skills to test. The pitch has started to show the signs of breaking, and Bangladeshi spinners will fancy their chances.

The third day belonged to Bangladesh, hands down. A superlative show with the bat has earned them the Day 3 honours, but there is still a lot of cricket left in this Test. Both the teams will have to work very hard on last two days to get the favourable result. 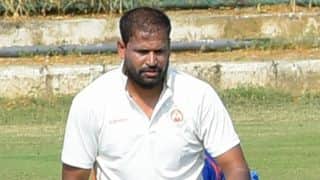