Bairstow sent a timely reminder of what he is capable of through his Player-of-the-Match worthy performance.

Jonny Bairstow couldn’t have hoped for a better match for his comeback. Sidelined due to injury for the first two Tests, the wicketkeeper batsmen underlined his worth by scoring 110 in the first innings of the third Test, which England went on to win by 42 runs, and thus completing a 3-0 sweep over Sri Lanka.

Bairstow scored 110 off 186 deliveries with nine boundaries and a six to help England recover after their openers were removed for 36 on the board. Bairstow got together with captain Joe Root to add 100 runs for the third wicket and put on another crucial stand of 99 with Ben Stokes to hand his team advantage as England posted 336 in the first innings.

Although he did not keep wicket with Ben Foakes taking over the wicketkeeping duties, Bairstow sent a timely reminder of what he is capable of through his Player-of-the-Match worthy performance.

“It s been really good for me. Not often do you come into the side and win the series,” Bairstow said during the post-match presentation ceremony. “It’s been a good tour. It’s been up and down for me personally; getting injured and coming back into the team, it’s been a good journey. I ll just see how it goes; there is plenty of cricket to be played. The guys have put in a real shift and I m looking forward to the Windies tour. It’s nice to be out with the friends,” Bairstow said during the presentation ceremony.

With the win, Joe Root s England has grabbed itself a slice of history. This marks just the third instance of a non-Asian team sweeping a Test series in Asia 3-0, and the first by any other team than Australia. The moment came when Jack Leach trapped Sri Lanka captain Suranga Lakmal lbw for 11 on Monday at the SSC. 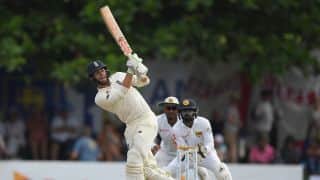