Sri Lanka's openers made a solid start on Saturday while chasing a tough target of 268 to beat New Zealand.

Sri Lanka openers made a solid start on Saturday while chasing a tough target of 268 to beat New Zealand, reaching 76 by tea on the fourth day of the first Test at Galle. With the record run chase in a Test here just 99, Sri Lanka require a further 192 runs to go one nil up in the two-match series, their first in the World Test Championship.

Skipper Dimuth Karunaratne reached his 23rd Test fifty with a cut shot to third man off the bowling of William Somerville just before tea, going into tea on 52*. Lahiru Thirimanne, on 23*, had a shaky start but importantly was not out at the break as the pair batted through the afternoon session.

Karunaratne was solid using both the sweep and reverse sweep to good effect to pick up his runs. A traditional Galle wicket would have benefited the bowlers by day four but the track was holding up and there were no demons for the batters.

Left-arm spinner Ajaz Patel, who picked up a five-wicket haul in the first innings, bowled only three overs in the second innings. William Somerville sent down 13 overs while all-rounder Mitchell Santner sent down nine after a brief spell by the seam bowlers. All bowlers kept up the discipline and did not concede the first boundary of the innings until the 22nd over.

New Zealand were bowled out for 285 after resuming on 195 for seven. Wicketkeeper batsman B.J. Watling top scored with 77 runs and was well supported Somerville’s unbeaten 40 — his best score in First Class cricket.

Rookie left-arm spinner Lasith Embuldeniya was the pick of the bowlers after claiming four wickets, in his return to the side following surgery on his left thumb. Dhananjaya de Silva finished with three wickets while Lahiru Kumara accounted for two. 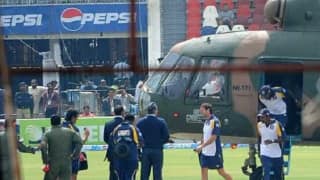