New Zealand were bowled out for 285 in their second innings on Saturday, setting Sri Lanka a tough target of 268 runs to win the first Test at Galle.

New Zealand were bowled out for 285 in their second innings on Saturday, setting Sri Lanka a tough target of 268 runs to win the first Test at Galle. No team has successfully chased more than 99 runs at Galle, giving the visitors hope they can be victorious at the ground for the first time ever after three previous losses.

However, while the Galle wicket traditionally helps spin bowlers, the resistance shown by New Zealand’s tail-enders suggested this particular wicket may not have the usual demons. The wagging of New Zealand’s tail cost the Sri Lankans dearly as the last five wickets added 187 runs after the first five fell for just 98.

Wicketkeeper B.J. Watling, who had stitched a 54-run stand with Tim Southee for the seventh wicket on day three, added 46 runs for the eighth wicket with William Somerville before being caught behind off Lahiru Kumara for 77. He faced 173 deliveries and hit six fours.

Kumara, who was used sparingly as Sri Lanka relied heavily on spin bowlers, generated serious pace at times clocking 150 kph (93 mph), speed rarely seen in this part of the world. After the dismissal of Watling, Somerville hurt the Sri Lankans further going onto post his best first class score. He added 36 runs for the ninth wicket with Trent Boult (26) and a further 25 runs for the last wicket with Ajaz Patel (14).

He finished unbeaten on 40.

Sri Lanka’s fielding was sloppy as four catches were put down in the second innings. Left-arm spinner Lasith Embuldeniya was the pick of the bowlers finishing with four wickets. Dhananjaya de Silva claimed three.

Lunch was delayed as play got underway 50 minutes late due to the wet outfield because of overnight rain. 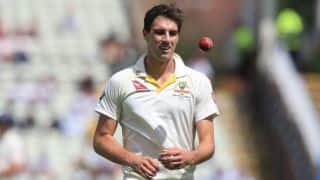 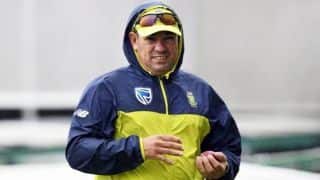