Given the problems both the sides are left to face, it looks to be an evenly matched encounter.

After going one up in the three-match series in a not-so convincing fashion, New Zealand, sans regular captain Kane Williamson, will be eager to iron out inconsistences with the bowling and fielding as the tourists look to seal the three-match Twenty20 International series against Sri Lanka in the second match on Tuesday.

Chasing 175 in the previous match, New Zealand lost their openers Martin Guptill and Colin Munro inside the Powerplay. It took a gritty effort from Ross Taylor (48) and Colin de Grandhomme (44) as the duo conjured 79 runs for the fourth wicket to bail their side out of trouble. The young Daryl Mitchell then held his nerves in the final stages of the chase and scored an unbeaten 19-ball 25 to take New Zealand over the line.

New Zealand’s bowling has been a concern. Seth Rance, the medium pacer, was plundered in the series opener going for 58 in his four overs. Another question is whether Tom Bruce, the Blackcaps’ best domestic T20 cricketer, be left to warm the bench and will Colin de Grandhomme be persisted at No. 4?

Sri Lanka too have their own share of problems. Kusal Mendis’ 79 coupled with some big hitting powered the hosts to a par 174 after opting to bat. However, Sri Lanka’s batting order still remains unpredictable. Add to that, their bowlers were unable to control New Zealand’s batsmen. Barring Wanidu Hasaranga and captain Lasith Malinga, none of them really threatened.

Given the problems both the sides are left to face, it looks to be an evenly matched encounter. Will New Zealand stand-in captain Tim Southee earn his fifth straight win as a captain or will the hosts bounce back. Let’s wait and watch!

Weather: Mostly cloudy with a maximum high of 31 degrees Celsius

You can also follow LIVE coverage of the match on CricketCountry (Sri Lanka vs New Zealand, 2nd T20I: Scorecard)

Fast bowler Kasun Rajitha was expensive in the first match going for 44 in his four overs. The team management could replace him with a pacer or an addition spinner.

Lockie Ferguson has been ruled out of the series with a thumb fracture. However, New Zealand are unlikely to make any changes to the playing XI.

“(We have) a great group of guys, a number of young guys coming out and playing with freedom, and also the experienced guys stepping up in crucial moments. It’s a great mix of youth and experience which makes my job easier.” Tim Southee

“They (youngsters) are not experienced under these conditions. They have to take the opportunities. In wet conditions (it is) hard to control the ball. We want to play our best cricket in the next game. The bowlers have to accumulate to wet conditions. Mental preparation is important too.” Lasith Malinga 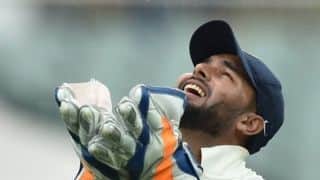