Hello and welcome to CricketCountry’s coverage of Day 2 of the first Test between Sri Lanka and New Zealand at Galle. The opening day was washed our earlier than the scheduled close of play, but not before Akila Dananjaya had marked his comeback to Test cricket with a five-wicket-haul, bowling with a remodelled action. His first three wickets arrived the fag end of the first session, which left Sri Lanka in a spot of bother at 71/3. But thanks to a strong comeback from Ross Taylor and Henry Nicholls, both of whom scored unbeaten half-centuries took New Zealand to 203/5.

Play was stopped at 3.42 pm (1012 GMT) due to rain and half an hour later was called off with 22 overs lost in the day. It will resume early on Thursday.

Ross Taylor hit an unbeaten half-century to keep New Zealand afloat after Sri Lanka spinner Akila Dananjaya claimed five wickets on a rain-hit day one of the first Test on Wednesday. New Zealand were 203 for five, having recovered from 71-3 at lunch, when rain stopped play for the day in the final session in Galle with Taylor batting on 86.

Dananjaya claimed his fourth five-wicket haul, bowling with a remodelled action after being reported for a suspect action last year. He took three early wickets including skipper Kane Williamson for nought before Taylor put on 100 runs for the fourth wicket with Henry Nicholls. 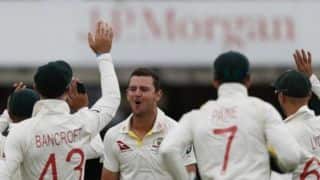