Hosts, Sri Lanka take on South Asian neighbours and former World T20 International (T20I) champions, Pakistan in the first of the two-match T20I series at the R Premadasa Stadium in Colombo on Thursday. Sri Lanka, who lost both the Test and One-Day International (ODI) series against the visitors, would look to come up with improved performance in the shortest version of the game and further look to clinch the series in order to finish the tour on a high. This would be the last and important series for Sri Lanka as a loss here could result in great loss of morale. READ: Wahab Riaz ruled out of Pakistan’s T20 series in Sri Lanka

Considering Sri Lanka’s squad for the T20Is, the batting line-up consists to big names in the form of Tillakaratne Dilshan, Chamara Kapugedera, Kusal Perera, Thisara Perera and skipper Lasith Malinga. There are also quite a few new faces with the likes of Chaturanga de Silva, Shehan Jayasuriya, Dasun Shanaka, Milinda Siriwardana and Kithuruwan Vithanage, who are capable of chipping in when the team requires. However, with most of them being not so experienced to international cricket, it would be interesting to see how they perform against a quality Pakistan side. Also, an interesting thing that this Sri Lanka squad possesses is the number of all-rounders, which certainly allows the skipper to build a strong batting line-up.

The bowling line-up consist the likes of experienced pros, Malinga and Nuwan Kulasekara, while rookie, Jeffrey Vandersay could also come handy followed by the all-rounders in the form of Dilshan, Mathews, Perera, Shanaka and Siriwardana. Pakistan, on the other hand, too have a decent squad, like the ones they had for the Tests and ODIs. The batting line-up consists of big guns in the form of Shahid Afridi, Sarfraz Ahmed, Ahmed Shehzad, Mohammad Hafeez, Shoaib Malik and Umar Akmal, while among the inexperienced guys, its Mohammad Rizwan, Mukhtar Ahmed and Nauman Anwar, who too can play a big role with the bat and bolster the batting line-up. READ: Mohammad Hafeez playing like a champion, says Rameez Raja

The bowling line-up too consists a good combination.  The likes of Anwar Ali, Mohammad Irfan, Sohail Tanvir and Yasir Shah, along with inexperienced bowlers like Imad Wasim and Zia-ul-Haq could also play a tough role to bolster the bowling attack. Pakistan are going to miss the services of their in-form fast bowler, Wahab Riaz, who has been withdrawn from the series due to injury he suffered during the ODI series and has flown back to Pakistan. Pakistan would also miss the bowling services of Mohammad Hafeez, following his ban for a year from international cricket after he failed to clear the bowling test in Chennai for a reported suspect action. READ: Sri Lanka name 5 uncapped cricketers for Pakistan T20I series

With the game being played on the moderate tracks of R Premadasa at Colombo, it expected to be an even and fair contest. However, considering both the teams, indeed Pakistan have a better squad compared to that of Sri Lanka and have a high chance to win the T20 series as well. However, T20 being anybody’s game, Sri Lanka could well turn the tables in this very format and could make Pakistan suffer their biggest nightmare through their rookie players who could fire out of nowhere. READ: Pakistan rise up ICC ODI rankings, inch closer to Champions Trophy berth 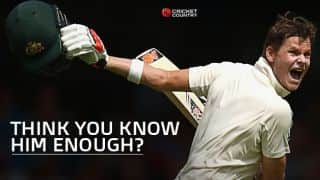 Quiz: How well do you know about Steve Smith?