Sri Lanka play their first series at home without either Kumar Sangakkara or Mahela Jayawardene.

Sri Lanka and Pakistan have played a lot of cricket of late and they are all set to continue their friendly rivalry as they play the first of the five One-Day Internationals (ODIs) at Dambulla on Friday. Both teams will welcome the additions to the squads as they switch from whites to coloured clothing. READ: Umar Akmal ignored for ODIs against Sri Lanka for failing to report to training camp

Pakistan defeated Sri Lanka 2-1 in the Test series though it might have little bearing on the one-dayers, Pakistan will hope the change of formats does not change fortunes for them. They were blanked 3-0 against Bangladesh and that put their chances of playing in the ICC Champions Trophy 2017 in serious doubt despite the win at home against Zimbabwe. Their situation called for a desperate measure that they have had to arrange a tri-series with Zimbabwe along involving West Indies as a back-up. Their first aim though will be to win the ODI series against Sri Lanka to get to safer shores.

Pakistan’s task though will be far from easy as they look to take on Sri Lanka who have always been good in home conditions. This time though they will be playing at home without two of their stalwarts Kumar Sangakkara and Mahela Jayawardene who retired from one-dayers after the ICC Cricket World Cup 2015 and if the Tests were any clue to take from; Sri Lanka will need their youngsters to step up to the plate. READ: Younis Khan is ‘modern world great’ claims David Lloyd

Sri Lanka have named two uncapped players in Milinda Siriwardana and Sachith Pathirana in a 15-man squad and it will be interesting if they get a game. Rangana Herath does not find a place in the squad and Sri Lanka will hope Herath gets back to his best as he looked far from his best in whites.

Angelo Mathews will hope the return of Tillakaratne Dilshan at the top boosts their chances and he will want the likes of Dinesh Chandimal and Lahiru Thirimanne to continue from where they left during the ICC Cricket World Cup 2015. Lasith Malinga and Suranga Lakmal look like guaranteed starters and Thisara Perera might be the third seamer for them thereby giving their team a fine balance. READ: Sri Lanka announce squad for five-match ODI series against Pakistan

Pakistan will welcome the tall and threatening Mohammad Irfan back to the squad but they will have to be content with no Wahab Riaz who was injured during the Tests. The inclusion of Shoaib Malik should strengthen their batting order as he has looked in good touch for his team Barbados Tridents in the Caribbean Premier League (CPL) 2015. Mohammad Hafeez too finds a place in the squad despite having his action reported. He is due for a Test and will be interesting to see how his fate is sealed.

Sarfraz Ahmed batted well for Pakistan during the Tests and it might not be a bad ploy to open with him though Mukhtar Ahmed batted well against Zimbabwe and he might not be replaced that early. Irfan will have the likes of Ehsan Adil, Rahat Ali to accompany him but it will be worth watching how the skipper Azhar Ali uses Yasir Shah who ran through the Sri Lankan team in the Test series.

With both the sides evenly matched in terms of skills and experience, expect a closely contested contest devoid of rain. Pakistan though have a lot more at stake and Ali will expect his colleagues to be on the toes always. 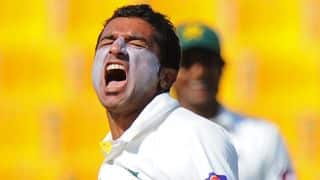 Bilawal Bhatti: Coaches believed that I was too short to be a good fast bowler