JP Duminy guided South Africa to a five-wicket win over Sri Lanka with 32-ball 53-run knock helping the visitors to a 1-0 lead in the opener of the five-match series played at the Dambulla International Stadium, Rangiri on Sunday.

Chasing a modest total of 193, South Africa lost opener Hashim Amla (19) and one down Aidem Markram off consecutive deliveries in the fifth over bowled by Akila Dananjaya before Quinton de Kock and Faf Du Plessis combined for an 86-run stand for the third wicket.

Dananjaya struck again when he removed de Kock for 47 and Sri Lankan hopes were raised when Lakshan Sandakan scalped du Plessis (47) soon after. But Duminy steady the ship and took South Africa closer to the target even as he lost David Miller (10) to Suranga Lakmal.

Duminy then went on to complete his 26th ODI fifty taking South Africa home with 19 overs to spare.

Opting to bat first, SL had a disastrous start finding themselves in tatters at 36 for five before Thisara Perera and Kusal Perera combined for a 98-run stand in quick time. Thisara made 49 off 30 deliveries becoming Shamsi s first victim of the day,

Rabada, 23, had earlier picked three of the first five wickets to fall, claiming Niroshan Dickwella (2) in the first over, Kusal Mendis (3) and Shehan Jayasuriya (0). Lungi Ngidi added the scalp of skipper angelo Mathews (8) while Upul Tharanga was run-out by JP Duminy.

After SL lost half their side inside the first ten overs before Kusal and Thisara joined forces to push the team forward.

After removing Thisara, Shamsi took out Akhila Dhananjaya (11) and Kusal (81) and Lahiru Kumara (3) to finish with four for 33 in 8.3 overs. 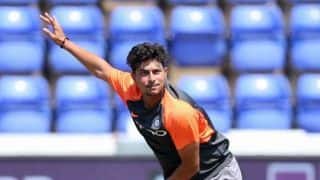