Sri Lanka were off to a rollicking start in their ICC World T20 2014 semi-final against the West Indies at the Sher-E-Bangla National Stadium, Mirpur, but then lost two quick wickets. Kusal Perera and Tillakaratne Dilshan had attacked Krishmar Santokie and Samuel Badree early in the innings to take Sri Lanka to 43 for two in five overs.

Things started off in the first over when Dilshan charged down the ground and smashed Badree over mid-on for four. In his second over, Badree went for two sixes as Dilshan smashed the first ball for maximum over long-off and then Perera followed with a similar shot over off the last ball.

In the fourth over, Perera then smashed Santokie over long-on for another six before chopping one onto his stumps. And, Mahela Jayawardene was run-out without facing a ball in the fifth over when Dilshan cut one to point and took an impossible run.

Earlier, Sri Lankan captain Lasith Malinga won the toss and decided to bat first. Dinesh Chandimal, who decided to sit out in place of an extra spinner. Seekugge Prassana has taken the place of Chandimal in this semi-final. 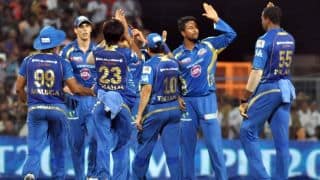