Fleming is the long-standing coach of CSK.

Melbourne: Former New Zealand captain and Chennai Super Kings (CSK) coach Stephen Fleming has expressed the hope that he and other affected players will be looked after in the wake of the two-year suspensions of his team and Rajasthan Royals (RR) from the Indian Premier League (IPL).

The Supreme Court-appointed Justice Lodha Committee on Tuesday ordered suspension of Chennai Super Kings (CSK) and Rajasthan Royals from IPL for two years in a 2013 spot fixing and betting scandal.

Fleming is the long-standing coach of CSK. His future, along with compatriot seamer Tim Southee and several Australians, is in doubt after the suspension of their respective IPL teams. Rajeev Shukla: We are always concerned about IPL

Fleming is concerned that the two teams will go the same way as three other teams which have been booted out of competition for breaching IPL terms — Kochi Tuskers Kerala (in 2011), Deccan Chargers (2012) and Pune Warriors India (2013). BCCI officials to request Jagmohan Dalmiya to resign from president post

“Some players are still waiting for money so I don’t think the Board of Control for Cricket in India (BCCI) will let that happen again. And I’d like to think that our franchise has been very good to players and wouldn’t let that happen,” Fleming was quoted as saying by NewstalkZB on Wednesday.

“What you’d like to see is the players get a fair deal, get paid for what they’ve done and then have an opportunity moving forward.”

Fleming said the suspensions recommended by the India Supreme Court on Tuesday caught him by surprise. Chennai Super Kings to take call on MS Dhoni’s future

“No one really had any idea and I think that’s why there is shock around the severity of the punishment because I don’t think the franchises were preparing themselves to be suspended,” he said.

Australia’s Test vice-captain Steven Smith said he was disappointed his franchise had been suspended and would now reconsider whether to seek a new club or a big-money payout deal for next year’s tournament.

“It was disappointing to hear about the Rajasthan Royals facing two years of being sidelined from Indian Premier League and I’m sure I’ll hear more about what’s going on there in the coming weeks,” Smith was quoted as saying by Cricket Australia (CA) on Wednesday. Enforcement Directorate arrests 3 bookies from Delhi, Mumbai over IPL betting issue

“I really enjoyed my time playing with Rajasthan, it’s been a good franchise to be involved with so I’ve got some decisions to make whether I go back into the IPL auction next year or have a little period off,” he said.

Cutting claimed on Twitter that the suspensions were “surely a gee up”. IPL 9 will go ahead as planned, says Rajeev Shukla 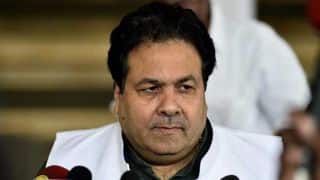 Bangladesh can beat any ODI team in the world: Tamim Iqbal