Harmison is also an ambassador for the Professional Cricketers' Association.

Right-arm fast-medium bowler Steve Harmison bowled close to 144 kmph around a decade back and helped England to win back the Ashes. This was during an enduring summer season. Lately he has been working as football manager for Colliers Ashington AFC. As he lingers in his present career; he was witness to a delightful welcome that the English cricket team got after the 2-1 recent Ashes win in Trafalgar Square. This was followed up by a downing street salutation. However, it is said that Harmison and his football club players will not receive a ballyhoo at the beginning of the long road to Wembley. This will happen if they see off Bradford-based Albion Sports. READ: Steven Harmison named manager of local football club

Harmison in a conversation with bbc.com said, “If someone had told me in 2005 that I’d be manager of Ashington in the FA Cup 10 years later I wouldn’t have laughed at them. It’s my hometown club. I played for them before I became a professional cricketer. My dad, Jimmy, played for them, and my brother, James, plays for them now. I love being a football manager. It’s a great challenge and I like being around non-league players for their enthusiasm. I can’t wait for the FA Cup,” said the 36-year old former English pace bowler.

Harmison took 17 scalps in his last Ashes outing (in five Test matches) and helped England to regain the urn. It needs to be mentioned here that Ashington was a good club to start with, for Harmison. It has a decent record in England. Harmison holds the reigns of his club from a city that has given great champion players in the past. These class sportsmen include Jackie Milburn; also Charlton brothers, Jack and Bobby who were a part of the World Cup winning squad. Ashington is based in the district of Northumberland which is approximately at a distance of 24 km north of Newcastle, are also called ‘Colliers’ and were voted in to the Football League more than 90 years ago, in 1921. They were voted out in 1929.

A lot of home games were played in Portland Park for over a century (1909-2008). They later shifted their base to pound 1.2 million Woodhorn Road. Here a stand with a capacity for 250 spectators is yet to open; scheduled for October. Ian Lavery who is the chairman and local MP said, “Ashington’s a tough place, a mining community. I’ve heard people say that appointing Steve was a publicity stunt, but why would it be? We’re ambitious and Steve is a sports star.” ALSO READ: VIDEO: Steve Harmison recollects final moments of England s thrilling win at Edgbaston in 2005

Harmison’s career stats are staggering. He has 226 wickets in his kitty from just sixty three Tests. His one day record is also impressive. Harmison before coming to cricket used to play football and wanted to chart his career in the beautiful sport instead of the gentleman’s game. This changed when he was picked up on a contract basis at Durham 19 years ago. “Football has always been a huge part of my life. I saw the club was looking for a new manager and decided to put my name forward.”

‘Steve is likeable, a people person’ Ashington’s hierarchy were so impressed with Harmison during his interview that they offered him the job on the same day. We had 10 applicants including some from people who had played the professional game and others who were managing at a higher level,” summarised Lavery.

“We interviewed Steve, Ian and Lee on a Sunday afternoon in the Labour Party offices in Ashington. They were excellent – Steve oozed confidence. We said we’d get back to them and later that afternoon we called a board meeting and agreed that they were the right men to take the club forward. We immediately rang to tell them. Steve’s a likeable lad, a real people person and very approachable. He’ll stand in the bar after games and chat with fans,” he added.

Colliers (Ashington) were on the 17th spot and on a six-match losing streak in the Northern League table. It was thought that Colliers would be demoted but that did not happen after Harmison was recruited as the club’s manager. They won seven league and cup wins at a trot without a single loss. This improved their position and brought them to the 13th spot (a jump of 4) which is very impressive. This prompted former English batsman, Michael Vaughan to tweet:

Harmison was once named “Grievous Bodily Harmison” by the Daily Mirror after his brilliant performance against West Indies in 2004. But has his hunger and aggression toned down with time is the chief question. “I’m not a tea cup thrower. I’ve seen plenty of tea cups thrown in cricket dressing rooms throughout my career but I’m all for a fun and relaxed environment. You don’t get anywhere shouting. Don’t get me wrong, if someone steps out of line they are told in no uncertain terms.”

Harmison is still in touch with cricket and his doing his bit by being an ambassador for the Professional Cricketers’ Association. He worked pretty hard during the Ashes season. He wishes to continue his career as a football manager and is very serious in this endeavour of his. “I said from the very start this is no publicity stunt – people who know me will tell you I’m serious. I had planned to do my coaching badges this summer but it’s been manic with the 10th anniversary of the 2005 Ashes win. Do I have ambitions to be a Football League manager? Will I still be a manager in 10 months or 10 years? I don’t know, I’m just enjoying what I do.”

Meanwhile former all-rounder Andrew Flintoff has commented, “To be honest, I wasn’t surprised he put in for the manager’s job because I know what this area means to him. I know his family and his mates and he always speaks very passionately about Ashington and the north east. So when he got the chance to manage his home town club, it was a no-brainer for him. Ashington have got someone in charge who actually loves the place and that will rub off on the players – and the club.”

On being asked about his opinion on how Colliers will perform this season he said, “There are almost 400 teams taking part in the extra preliminary round alone. Each one of them has a burning desire to play a full-time club in the first round. We are no exception.” 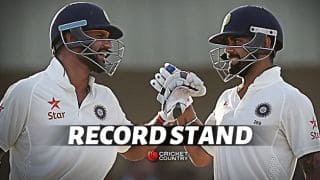