Banned former Australia captain Steve Smith is slated to continue his Twenty20 journey from Canada to the West Indies, with news that he will join Barbados Tridents in the upcoming season of the Caribbean Premier League.

Smith, currently serving a 12-month ban from international cricket for his role in the ball-tampering controversy that erupted in South Africa a few months ago, recently turned out in Canada s inaugural Global T0 tournament, scoring 167 runs at an average of 33 in six matches, and his next stop will be the CPL which starts August 18.

Smith donated his playing from the Global T20 Canada tournament to grassroots cricket programs in that country and Australia.

David Warner, also banned from international cricket for a year, played in Canada as well and will be part of the St Lucia Stars in the CPL. The two banned Australian cricketers are scheduled to play each other on August 17 and September 2 when their teams clash. Following the CPL s conclusion on September 16, Smith is expected to play for Sutherland in Sydney s Premier Cricket competition.

Neither he nor Warner will be permitted to turn out in the Big Bash League, however.

Smith, 29, was yesterday confirmed as the top-ranked Test batsman as per the ICC ratings, accumulating 929 ratings points despite not having played international cricket since March. 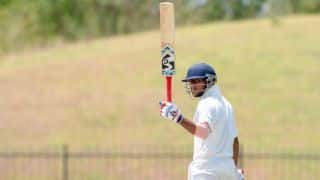 India U-19 vs Sri Lanka U-19: Pavan Shah registers highest score by an Indian in Youth Tests