Steven Finn did not play the series against Pakistan as he suffered a n injury just ahead of the first Test.

England fast bowler Steven Finn will fly to South Africa to join the England squad ahead f the Test series against the Proteas, starting from December 26 at Durban. Finn had picked up a leg injury during England’s tour of the United Arab Emirates (UAE). The England selectors had given Finn some time to recover from his injury, but Finn roared back to full fitness and finished with figures of 3 for 22 in the match between England Lions and Pakistan A in a T20 match at UAE, according to skysports.com. Finn was impressive during the Ashes 2015, along with James Anderson and Stuart Broad wrecked havoc in the series. READ: Alastair Cook expects strong competition for places win England tour of South Africa 2015-16 Test series

He followed his four-wicket haul with another wicket in the next match, which was good enough to prove his fitness in the eyes of the selectors. But with Anderson and Broad already confirmed starters, Finn will face competition from other seamers like Mark Footit, Chris Jordan, Chris Woakes and Ben Stokes competing for the third seamer’s position. Finn was excited with his selection. He said, “I’ve been really pleased with the way things have gone with the Lions. I’ve bowled my overs and my foot has come through fine. I’m excited by the prospect of linking up with the team out in South Africa.” READ: South Africa announce squad for first two Tests of home series against England

A few days back, South Africa had announced their squad for their opening two Tests of their home series against England. In highlighting developments, AB de Villiers will return to duties as wicket-keeper while Imran Tahir and Simon Harmer have been dropped. South Africa have opted for a one-spinner strategy with only Dane Piedt retained in the squad in the spin-specialist department after his encouraging performance against India in the final Test of the four-match series at Delhi. READ: AB de Villiers to keep wickets in Tests against England 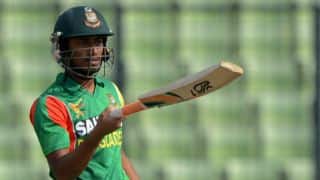