Australia skipper Steven Smith has now insisted that cricket would dominate in the upcoming series against South Africa and not sledging.

Johannesburg: Australia Test skipper Steven Smith – who after the recent Test series defeat to Sri Lanka had said that his side was too quiet in the field – has now insisted that cricket would dominate in the upcoming series against South Africa and not sledging. After the 0-3 whitewash at the hands of Lankan Tigers, Smith had said his side was too quiet in the field, but he has now clarified that he meant in terms of energy, not sledging. “The things I said about Sri Lanka were more about us having some more energy and presence in the field. It s not about getting in their face and sledging them or that kind of thing, Sport24 quoted the right-handed batsman as saying. FULL CRICKET SCORECARD: Australia vs South Africa, 1st Test at Perth

“It s about making sure that our attitude s right and that we have that presence out on the field so if we get a half chance that we’re in a frame of mind to be ready to take it. I don’t think it s anything about hostility and sledging as such, he added. Aussie fast bowler Peter Siddle had already said he would enjoy teasing Kagiso Rabada in particular, to which the latter replied that he would love to be happy to return the favour. AUS vs SA: Starc eager to play 1st Test

But the 27-year-old does not want cricket to be overshadowed by antics in the middle of the ground. Proteas regular skipper AB De Villiers had recently claimed that the sledging done by the Australian cricketers in their last three-match Test series in 2014 was the worst he has witnessed in his entire career. The South African skipper further went on to say that sledging by the Aussies in that series was `personal` and over the top. Lehmann: Khawaja can bat at any position

Insisting that De Villiers must never have been sledged before, Australia pacer Peter Siddle said the Australian side was `pretty tame` during 2014 series in contrast to past eras and past teams. Meanwhile, Faf du Plessis, who is leading the side in the absence of injured De Villiers, believes the Australian cricket’s snarly sledging era is now over, especially because Smith is now leading the side.

“I have played against Australia now a lot of times and I think this [Australian] team is a little bit different than the team of old. The two of us play a similar brand of cricket now … we more let the cricket do the talking,” Du Plessis said. The first Test starts at the WACA in Perth from November 3, the second Test would be played at the Bellerive Oval, Hobart from November 12 and the third and the last Test at the Adelaide Oval from November 24. 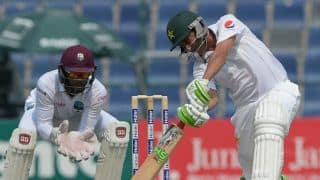