The Broad Appeal has raised about 500,000 in the last five years to help in the research over a disease that affects two out of every 1,00,000 people.

England pacer Stuart Broad, who finished as the highest wicket-taker from either sides in the Ashes 2015 has been involved in a campaign off the field which is extremely generous by nature, but has a long way to go in order to achieve the actual target. The motor neuron disease to which Broad lost his step mother Michelle in 2010 has no cure, and the organisation which the cricketer s family is running is trying to make awareness about it as well as trying to contribute money into the research.

The Broad Appeal was set up in 2010, reports the official website of Cricket Australia, following the death of Broad s stepmother to the disease which she was diagnosed with only 15 months ago. Michelle was well known to the sports community as an organiser of international golf tournaments. She was in Australia sometime in 2009 when she learned about some symptoms, and Michelle was immediately referred to neurologists for treatment. ALSO READ: Stuart Broad hopes England will improve overseas record against Pakistan in UAE

Broad said, Her symptoms were she had the odd headache every now and then but we d be out for dinner, she d have a glass of wine and she d start to slur her words. We were a very tight family so we d be like oh Miche [Michelle], you re getting old you can t even handle your wine any more . And that was how she became a bit concerned, after three or four dinners of slurring her words after one glass of wine she went to the specialists and there it was bang. I went to the Twenty20 World Cup in 2010 and Miche was fine, quite chatty and I came back three and half weeks later and she couldn t even smile, so it just got whipped away from her.

He added, She was diagnosed and passed away within 15 months, which is a frightening pace really. It attacks your system in a way that no-one can imagine, and it s the worst disease in my opinion that you can possibly have because your mind is perfectly fine but your body is progressively not responding. You tell yourself to move your right arm and nothing happens. You can t eat, you can t swallow, but your mind is fine. It s horrible. ALSO READ: Stuart Broad shows a rare glimpse of history in Ashes 2015 4th Test at Trent Bridge

The Broad Appeal has raised about 500,000 in the last five years to help in the research over a disease that affects two out of every 1,00,000 people, hitting the women more than men.

Australian all-rounder Shane Watson has also helped in raising money for the ongoing research due to his friendship with a former Melbourne-based leukaemia specialist Dr Ian Davis. Watson raised money for the same during the ICC Cricket World Cup 2015.

Unlike the McGrath Foundation which is supported by Cricket Australia (CA) and Cricket New South Wales (NSW), the Broad Appeal has not got a very big support but has garnered a lot of attention. The charity was established by the cricketer s father Chris a former cricketer himself and Gemma, who was working with the England s mens s team for sometime as a data analyst. Gemma has returned to New Zealand, the place where she was born, and the England cricketer is currently handling a lot of responsibilities.

He told the Cricket Australia (CA) website, A bit more admin has fallen into my lap, but dad and his fianc e Rose take on a huge amount of the weight, and my mum (Carole) and my step-dad organised a golf day that went fantastically well at Nottinghamshire Golf Club this year that raised 11-12,000.

I try to get involved as much as I can, we try to meet up every six weeks or so to throw ideas about but generally for prizes and stuff I m always on the phone to (England and Wales Cricket Board corporate partners) Investec and Adidas. They must hate seeing my name popping up on their phone, but they ve been so supportive as well and you can t really do this type of thing without the support of the people around you. It s very much the family just helping out, with us trying to get people to wear stickers, and my girlfriend (Bealey Mitchell) wearing the T-shirt to help promote it outside the ground, he revealed.

Broad continued, So it s very intimate, and I think people enjoy that as well. It s a bit of a different side to it – the local club having a stand selling caps where you can just throw in a tenner for a cap. Dad phones up the local pub and they help out with a stand, it s not professional and I mean that with all respect to dad, but it s not professionally run by an organisation. And I think that keeps a bit of the character of Nottinghamshire as well and people feel like they can get connected to the Broad Appeal and help us out in any way whether it s for 5 or 500.

Broad recalled the work McGrath Foundation is doing and says even though his organisation will not be able to reach the same level, they are still trying to raise awareness.

The McGrath Foundation is spectacular what they ve been able to do, obviously with a lot of support from Cricket Australia and Cricket New South Wales, that Test match is very special to play in actually. When you see that the whole ground turns pink and it s a really brilliant occasion, and it s raising huge awareness over there and funds for cancer. So that s an inspiration, and obviously we re never going to reach the levels of the McGrath Foundation but we re just trying to raise awareness in our own particular way.

When Miche was first diagnosed with it, dad told me and I had no idea what it was neither of us had ever heard of it. So I think we ve broadened the horizons of the public slightly on what motor-neurone disease is, and I think when you know about the disease and that it s essentially a death penalty with no cure it makes people want to help you try and find a cure.

It s not a widespread disease, it s not going to affect everyone but since I ve started doing research on it the number of people who have come to me and said I know someone with it etcetera makes me realise there s a lot of it about. So I0 think raising awareness of it around the world is so important. The scary thing is there s no cure, but hopefully in my lifetime if we can keep putting money into research and supporting good science that can find a cure because there will be something out there that can help, Broad concluded. 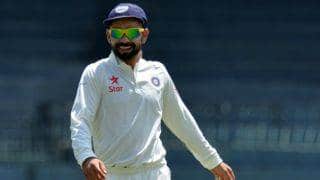