Stuart Broad is struggling with Patellar tendinitis and would miss the remaining matches.

England captain Stuart Broad, who will miss the rest of the series with injury, said his side needed to improve ahead of the second Twenty20 International against the West Indies on Tuesday.

“West Indies outplayed us, there is no doubt about that. We shouldn’t let that take away from what we have done in the last couple of weeks and we have got time to improve in the next two games. We were pretty happy with 170, maybe it was a touch over par but we never got going with the bat. You need one of your top-3 to get in and that hasn’t happened for a while,” he said.

The all-rounder said he was struggling with Patellar tendinitis and would miss the remaining matches.

“I’ve got Patellar tendinitis in my right knee. I’ve had it all winter. It’s just been a managing thing all winter. But obviously the workload has been quite heavy and it’s gradually got a little bit worse,” said Broad, who only bowled two overs and showed visible signs of discomfort while batting Sunday’s.

“I caught my knee in the sand in [one-day series] Antigua which has brought a lot of fluid into it. So there’s not much movement in there and I’ll be missing the next two T20s to have an injection to get right for the warm-up games in Bangladesh.”

Broad is expected to lead England in the World T20 later this month. England are clubbed with South Africa, Sri Lanka and New Zealand in Group I of the March 16-April 6 tournament.

“I’ll have to have a rehab period at some stage in the next 12 months between six to 10 weeks. But there’s a decent period at the end of the English season which I can look at probably or maybe four weeks in April. But it won’t put me in doubt for the World T20.” 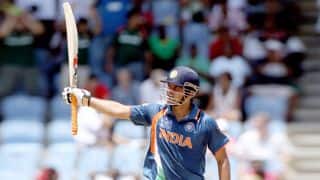