The cricket memorabilia is being auctioned by Cricket Australia on eBay. A stump from the ICC Cricket World Cup 2011 quarter-final played between India and Australia signed by Sachin Tendulkar and Yuvraj Singh is up for auction as part of Sunday’s Bushfire Appeal match.

Batting legends Tendulkar and Yuvraj have each signed the stump from the quarterfinal India went on to win by five wickets en route to their second ODI world cup title. The quarter-final, played in Ahmedabad saw Australia captain scoring a century to power his team to 260/6. Tendulkar and Yuvraj led India’s successful chase of the target with each hitting half-century.

The cricket memorabilia is being auctioned by Cricket Australia on eBay.

The Ponting XI will be coached by Tendulkar while current Australia Test captain Tim Paine will coach the Gilchrist XI at the Junction Oval in Melbourne.

Australia allrounder Ellyse Perry invited Tendulkar to bat for an over, bowled by her, during the innings break of the charity match.

The charity match is the latest in a series of initiatives from cricket communities including players and clubs to raise funds for the bushfire victims. Legendary spin bowler Shane Warne had raised over a million Australian dollars by auctioning off his baggy green. 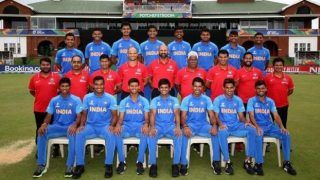