Sri Lanka Women secured a 14-run win over Irish Women team, in the Super 10 Group A, Match 9 of the ongoing Women's World T20.

Sri Lanka spinner Sugandika Kumari claimed three wickets for 24 runs, as the women’s team secured a 14-run win over the Irish Women team, in the Super 10 Group A, Match 9 of the ongoing ICC Women’s World T20 2016, at the Punjab Cricket Association (PCA) Stadium in Mohali on Sunday. Cicelia Joyce and Isobel Joyce, both scored 29 each in the Irish innings. Earlier, Sri Lanka skipper Chamari Atapattu won the coin toss and elected to bat first on the typical batting strip at Bengaluru, as they finished on an average total of 129 for the loss of seven wickets, courtesy of three batsmen scoring above 30, as both the teams went in with a strong batting side. FULL CRICKET UPDATES: Ireland Women vs Sri Lanka Women, Match 9 Group B at Mohali

Ireland began the chase on a shaky note, losing their opener Clare Shillington for a mere single in the second over, with Sugandika Kumari bowling her out, as the score read just five. Just 13 more added to the total, it was Cath Dalton ,who to fell for mere five in the fourth over to the same bowler, after being caught behind by Dilani Manodara. It was again followed by a 22-run stand, before Isobel Joyce was dismissed off an unfortunate run out for 24 in the ninth over.

Neverhteless, it was not until the 16th over, before a well going 47-run stand for the fourth wicket came to an end between Cicelia Joyce and Laura Delany, as Joyce fell for 29 to Oshadi Ranashinge, after being caught by Nilakshi de Silva; followed by Gaby Lewis for mere four in the 17th over, as Sugandika makes her stumped. The very next over also saw the dismissal of Laura Delany, who was run out again by Sugandika for 29; followed by Mary Waldron for just three off another run out, as the score read 102. Amy Kenealy too was dismissed for mere four in the final over by Inka Ranaweera, as t was the pair of Kim Garth and Lucy O’Reilly, who batted out until the end, but couldn’t get the job done, as the Lankans won by 14 runs. 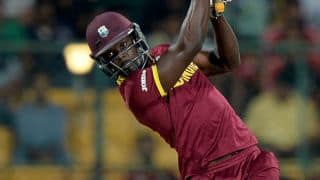 Mohammad Shahzad: Would have loved playing Dale Steyn because he is not dangerous