India have ensured the number one spot on the ICC Test team rankings and a prize of $1 million.

Cape Town: The International Cricket Council (ICC) presented the ICC Test championship mace to India captain Virat Kohli in the Newlands Stadium at the conclusion of the South Africa tour on Saturday. On behalf of the ICC, Cricket Hall of Famers Sunil Gavaskar of India and Graeme Pollock of South Africa made the presentation immediately after the awards ceremony for the T20I series.

Kohli at the presentation said: “It’s truly a great feeling to hold the ICC Test Championship mace again, which is an acknowledgement of our success in the truest format of the game. We’re proud of the way we have performed in Test matches over the past couple of years and our performances have reflected in the rankings. The quality of a side is judged in the way players step up when needed, and that is what our boys have done time and again.”

Watch: @imVkohli was awarded with the ICC Test Championship Mace last night in Cape Town, with India confirmed to be retaining the top spot in the @MRFWorldwide ICC Test Team Rankings at the April cut-off date!

India have ensured the number one spot on the ICC Test team rankings and a prize of $1 million after their victory in the Johannesburg Test against South Africa last month ensured that no team can move ahead of them in the rankings at the April 3 cut-off date. 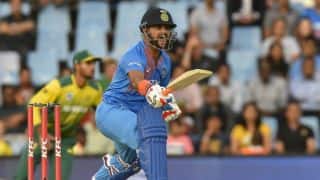