The three-man committee of former Test cricketers S Venkataraghavan and Javagal Srinath, and former umpire AV Jayaprakash gave Sunil Narine’s action a thumbs up after tests in Chennai. A Board of Control for Cricket in India (BCCI) media release stated, “The committee concluded that Mr. Sunil Narine, who had remodelled his bowling action, was within the ICC approved limits for all types of deliveries that were assessed and has hence recommended to the BCCI, that his name may be removed from the warning list of bowlers with suspect action.”

Narine’s action had become a big bone of contention between the BCCI and the Kolkata Knight Riders (KKR), who at one point had threatened to pull out of the tournament. This comes as a huge boost to the defending champions ahead of Indian Premier League (IPL) 2015 as Narine has been one of their key players and the biggest factor in their success in their two IPL victories. IPL 2015: Sunil Narine skips practice again for KKR

KKR will be relieved at the inclusion of Narine, who has been instrumental in their two title victories in three seasons. Australian veteran Chinaman Brad Hogg was purchased as cover for Narine, but KKR skipper Gautam Gambhir will be happy to make Hogg sit on the bench all season if it means Narine will play. 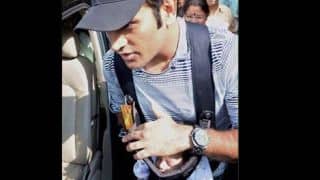 Photos: MS Dhoni spotted with his daughter at Ranchi airport