Chasing a huge target of 202 to win, Rajasthan Royals could manage only 194 for seven wickets off the 20 overs.

Sunrisers Hyderabad (SRH) trumped Rajasthan Royals (RR) by seven runs in the 41st match on the ongoing Indian Premier League (IPL) 2015 tournament, at the Brabourne Stadium in Mumbai on Thursday. With this win, Sunrisers Hyderabad move to the fifth spot in the IPL 2015 points table while Rajasthan Royals remain at second.  LIVE CRICKET BLOG: RR vs SRH IPL 2015 Match 41

Chasing a huge target of 202 to win, Rajasthan Royals could manage only 194 for seven wickets off the 20 overs, as they lost a crucial game and the loss may hamper them in the tournament going ahead. The match seemed to have taken an interesting turn when Chris Morris hit three sixes in the second last over of Praveen Kumar, but Rajasthan could not go past the finish line eventually.

Steven Smith’s half-century was the only bright spot for the Rajasthan Royals (RR), as he scored a fluent 68 off 40 balls.  His innings came to an end in the 15th over, when he tried to make room and cut one straight delivery off Ravi Bopara, but missed the line completely.

Rajasthan never looked comfortable in their chase as they kept loosing wickets at regular intervals. Ajinkya Rahane, the tournament’s leading run-scorer, fell in the first over from Bhuvneshwar Kumar after hitting two boundaries.

Shane Watson and Smith then teamed up to take Rajasthan ahead, but the pressure of needing more than 200 runs to win bogged them down. While Smith took the cautious route, Watson tried hitting the big shots but he too fell in the fourth over after hitting three boundaries, having faced 12 balls.

Karun Nair and Deepak Hooda in the middle-order failed to make any mark with the bat, as their dismissals not only increased the pressure on Rajasthan but also on Smith, who started playing riskier game as the asking run rate kept moving up.

It was perhaps the approach by the Rajasthan middle-order that hampered their chase, as they became far too cautious after early blows that they stopped looking for big overs and remained content only with singles and doubles. By the 10th over, Rajasthan Royals were only in the 70s, whereas they should ideally have been near 100.

Talking about Smith, he smashed nine boundaries and two sixes to score a fluent 68. Smith is someone who will drop the anchor and never the one who will play attacking game and turn the match on its head. Smith’s innings, in hindsight, was indeed slow as to what the situation demanded but he did well to hold the innings together.

James Faulkner was needed to play one of those blinders, but he could muster only 30 runs from 19 balls which certainly had some lusty blows out of the park. Faulkner was dismissed on a slow full toss, with the batsman hitting the first ball of the 18th over from Bhuvneshwar Kumar straight to the long on.

Earlier in the day, Eoin Morgan and Shikhar Dhawan slammed brilliant half-centuries to power Sunrisers Hyderabad to 201 for four. Morgan scored 63 off just 28 balls while Dhawan scored 54 off 35 balls with the help of six boundaries and two sixes as for the first time it looked like SRH batsmen had found their mojo in this IPL. LIVE CRICKET SCORES: RR vs SRH IPL 2015 Match 41 at Mumbai

IPL 2015: Kolkata Knight Riders vs Delhi Daredevils at Kolkatas, pick of the tweets 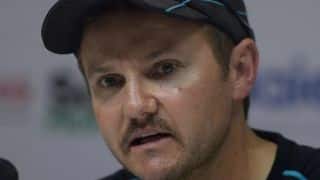