Mumbai Indians made their fifth IPL final with a big win over arch-rivals Chennai Super Kings in the Qualifier 1 of IPL 2019 at the MA Chidambaram Stadium, Chennai on Tuesday. This was MI’s third win over CSK this season the fourth straight win.

Mumbai Indians made their fifth IPL final with a big win over arch-rivals Chennai Super Kings in the Qualifier 1 of IPL 2019 at the MA Chidambaram Stadium, Chennai on Tuesday. This was MI’s third win over CSK this season the fourth straight win.

Here’s are a few talking points from the match:

CSK get a taste of their own medicine

CSK got a big advantage when they won the toss and opted to bat in the tricky MA Chidambaram Stadium, but were rocked early with their own medicine – spin. CSK have been slow starters, partly owing to the track, but had managed to pull things back up. However, on Tuesday, they lost three wickets inside the powerplay overs. Rahul Chahar got rid of Faf du Plessis, while playoff behemoth Suresh Raina was undone by Jayant Yadav and Shane Watson fell to Krunal Pandya. For 32/3, CSK never really recovered.

Mumbai brought in off spinner Yadav in place of Mitchell McClenaghan and he accounted for the dangerous Raina. Raina was bogged down on the sluggish track and went for a breakfree shot, managing a leading edge, which was taken by Yadav himself. . From 14 innings in playoffs prior to this game, Raina had an aggregate of 449 runs and over the years had played several match-winning knocks to help CSK through to the final. Raina failed to deliver in the playoff, but he has got at least one more crack at it in Qualifier 2, and possibly the final as well

Dhoni could not finish big despite no-ball reprieve

Dhoni has been CSK’s go-to man with the bat this season and when he walked out to bat at the fall of Murali Vijay in the 12th over, the Chennai crowd expected a lot from their Thala. Dhoni this season had found himself in pressure situations and had managed to pull his team out of trouble. On Tuesday too, Dhoni was cautious to start with and with Ambati Rayudu added 66 runs for the fourth wicket, however the final flourish never came. Mumbai bowlers, who had started well, finished tight with Dhoni remaining unbeaten on 37 off 29 balls. He was given a reprieve when he was caught at backward point by Ishan Kishan off Jasprit Bumrah off a no-ball.

While all the talks have been about Rohit Sharma, Quinton de Kock, Hardik Pandya and Kieron Pollard, it was Suryakumar Yadav, who flew under the radar with crucial runs in the middle-orders setting up many a Mumbai Indians win, and in a crunch game, the former Mumbai state skipper stood tall with an unbeaten  71 off 54 balls negotiating the likes of Imran Tahir and Harbhajan Singh. 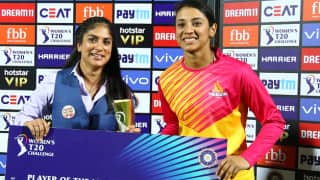 I no longer see myself as a woman cricketer but simply as a cricketer: Smriti Mandhana