Currently, India are 237 for the loss of four wickets in 44 overs with opener, Rohit Sharma batting on 109.

Indian batsman, Suresh Raina was dismissed for an impressive 65 by skipper, Mashrafe Mortaza after being caught behind by Mushfiqur Rahim, who took a high catch, against minnows, Bangladesh, in the 2nd quarter-final of the ICC Cricket World Cup 2015 at the Melbourne Cricket Ground (MCG) in Melbourne on Thursday. Currently, India are 237 for the loss of four wickets in 44 overs with opener, Rohit Sharma batting on 109 and skipper, MS Dhoni coming in. Live Cricket Updates and Commentary: India vs Bangladesh, ICC Cricket World Cup 2015 Quarter-final 2 at Melbourne 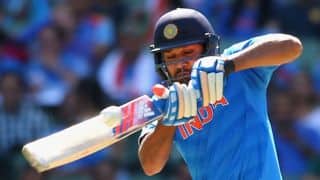 ‘Pakistan needs to maintain aggression, they have nothing to lose and the pressure will be on Australia’