A late boost from skipper MS Dhoni and Suresh Raina took the Chennai Super Kings to 164 for three against the Pune Warriors India in the Indian Premier League (IPL). 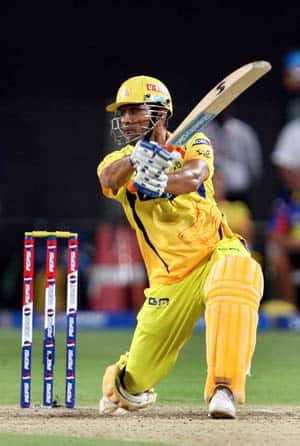 A late blitz from skipper MS Dhoni, along with Suresh Raina‘s half-century, took the Chennai Super Kings to 164 for three against the Pune Warriors India in the Indian Premier League (IPL).

Raina and Dhoni combined for an unbeaten 59-run partnership, that came off just 27 balls, to take Chennai to a healthy total.

Dhoni walked in at 103 for three in the 16th over, and if you’re good at math, you’ll realise the carnage that transpired at Pune in the last five overs. Sixty-one runs were scored in the 27 balls after Dhoni walked in, 45 off which came from the Chennai skipper’s blade. Oh, and it came off just 16 balls, including four boundaries and three sixes.

He may not be a Chris Gayle, who can take the game away from you on a good day. He may not be a Michael Hussey, who can grind the opposition into submission in this format. Dhoni is a finisher — whether his team is batting first or chasing. He can walk in to bat and immediately drive from fifth gear, which is exactly what he did today at the Subrata Roy Sahara, after Pune had done well for the first three quarters of the innings.

Earlier, Dhoni had won the toss and elected to bat first on what looked like a good batting track.

Michael Hussey was always going to be the key wicket for Pune. With 445 runs from eight matches, including four half-centuries, the Aussie veteran was the lynchpin of Chennai’s batting. However, the 37-year-old was to add just five more runs to that tally today as he was bowled by a countryman 15 years his junior, Kane Richardson.

Wriddhiman Saha punished the 22-year-old Australian by hitting a six and four off his next over, but was to perish to Rahul Sharma soon enough. With Chennai at 29 for two at the end of the first Powerplay,  Pune would have been extremely pleased with their start.

However, one of the reasons CSK have been such a successful unit in this tournament is that they are no one-man team. If your star performer fails, there is always someone or the other backing up. Today, that man was Suresh Raina.

The diminutive Indian left-hander had a sluggish start to the tournament, but had picked up form in the last couple of games with a half-century and a forty. Raina slowly, but steadily, pulled the initiative away from the Warriors, with good assistance from the cool Subramanium Badrinath. The duo brought up their fifty-run partnership in the 13th over and kept the scoreboard ticking around seven runs an over.

By the end of the 15th over, CSK had reached 102 for three. On a good batting crack, a minimum of 150 would have been the target. Badrinath, in a bid to up the ante, lofted Luke Wright over mid-off but only upto Steven Smith at the rope, who took a good catch. Badrinath was gone for a useful 34, and out walked MS Dhoni.

The roar that emanated from the Subrata Roy Sahara Stadium as Dhoni strode out into the middle, you’d think the stadium had been air-lifted to Chennai. Being India’s captain as well, Dhoni sure does have fans all around the country, but this was something else all together.

And Dhoni, ever the giver, got the fireworks out and lit up the evening for the 20 minutes he was in. Meanwhile, Raina brought up his second half-century of the season, along with 2,500 runs in the IPL, becoming the tournament’s highest scorer.

The duo took CSK well past 150, with Dhoni ending the innings by clearing his left leg out of the way and hammering Ashok Dinda’s full-length delivery over the sightscreen.