Surrey had claimed two bowling points in the first innings of the match against Worcestershire at New Road. Now Rory Burns, with his fourth hundred of the Championship, has taken them to 213 for 6 by stumps to get them a third point from the match. A defeat against Hampshire at The Rose Bowl have restricted Somerset to 178, which means that Surrey need only four more points to officially clinch this season’s title.

Worcestershire lost Ed Barnard early, but Wayne Parnell (42) shepherded the tail to add valuable runs for the last three wickets. Parnell will play for Worcestershire for the rest of the season after Ravichandran Ashwin has pulled out.

Then Parnell tore into the Surrey line-up, taking out Mark Stoneman and Dean Elgar for ducks and having Ollie Pope dropped at second slip, on nought. Pope hit back with a 68-ball 48, helping Burns add 97 for the third wicket. Burns stood unfazed at one end, adding 34 with Rikki Clarke and 68 with Tom Curran, and has definitely raised a claim as replacement for Alastair Cook on England‘s Sri Lanka tour later this year. 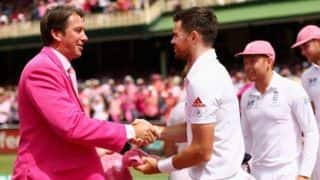