Surrey Stars played their semi-final on the same day, where they edged past Western Storm.

Surrey Stars brushed Loughborough Lightning aside to win the Women’s Cricket Super League, 2018, at County Ground, Hove. Lizelle Lee had a blast against the Lightning bowlers, smashing 104 in 58 balls (13 fours, 6 sixes). Incredibly, the Stars still had 21 balls to face when she fell, in which they added 28 to reach 183 for 6. The Lightning chase ran out of steam after Marizanne Kapp and Dane van Niekerk, partners in real life, shared five wickets between them. Only Jenny Gunn (23 not out in 21 balls) put up resistance of some sort as Lightning crashed to 117.

The Stars had lost Bryony Smith and Sarah Taylor early, but Lee took them to 44 for 2 in the Powerplay overs. She hit the ball incredibly hard (and missed a few, and was put down at least once), but no bowler seemed to find a response to her onslaught. Linsey Smith and Georgia Elwiss bore the least brunt, but even they went for over six an over.

She found support in captain Nat Sciver (40 in 31 balls, 6 fours). The pair added 111 in 64 balls, which as good as took the match away from the Lightning.

It was not Sciver’s first outstanding performance of the day. The Stars played their semi-final earlier in the day, where Sciver first smashed a 43-ball unbeaten 72, then took 2 for 21, to help them defeat Western Storm by 9 runs. Sciver and Kapp (32 not out in 24 balls) added an unbroken 90 in 53 balls.

The young Stars bowlers deserve a mention. Sophia Dunkley, the 20-year-old leg-spinner, got Heather Knight in the semi-final and finished with 3-0-22-1, and backed it with 3-0-19-1 in the final. One must remember here that the Stars were defeating steep targets on both occasions. Picked only for the final, 19-year-old Mady Villiers rounded things off with 3 for 22, the best figures for either side.

Player of the Match: Lizelle Lee. 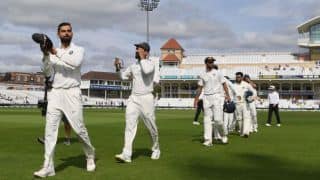