Kolkata Kinght Riders (KKR) won the important match of the against the Perth Scorcher in the Champions League T20 (CLT20) 2014. By doing this they extended their winning streak to twelve matches and elevated their strategy and standing to another level with a thrilling three wicket victory over the Perth Scorchers in Hyderabad on Wednesday.

An ice-cool 19-ball-43 not out from young Surayakumar Yadav helped the Knight Riders past the Perth Scorchers 151-7 following the second KKR batting collapse of the tournament saw them reduced to 13-2, 37-3, 87-5 and 125-6.  This was a victory that reaffirmed the fickle nature of T20 cricket with KKR never once really dominating a run-chase most would expect them to achieve comfortably before they flipped the match back on its head with a remarkable late surge.

Yadav came to the crease with 65 still required from just 35 balls; but playing some daring shots and capitalising on some loose bowling he hit regular boundaries to keep his side within touching distance of the Scorchers total before two brilliant consecutive sixes off the final two balls of the penultimate over bowled by Nathan Coulter-Nile suddenly swung the tumultuous match one final time in the Knight Riders favour, leaving them just five to win off the last over.

The Knight Riders were always playing catch-up in the run-chase after captain Gautam Gambhir edged to gully in the second over and ten balls later Jacques Kallis flicked a leg stump half volley straight to short fine-leg. However, even when Robin Uthappa fell in the sixth over with just 37 runs scored, KKR, with a deep batting order and fresh off a remarkable come back against the Chennai Super Kings last week, will have retained hope of a victory.

Indeed, even as the Perth Scorchers, who bowled with diligence and intelligence, continued to chip away at the Knight Riders batting order—Manish Pandey bowled by a superb yorker and Ryan ten Doeschate caught at long-on—KKR never seemed panicked or rushed and Yada embodied such equanimity. Admittedly, 151-7 was a total KKR would’ve been hugely disappointed not to chase after presenting twenty near-perfect strategic overs in the field.

With the Kolkata Knight Riders saving three overs from the world’s best bowler Sunil Narine for the final five in the innings, the emphasis was always on the Perth Scorchers – a top-heavy batting team with just two frontline batsmen (Craig Simmons and Adam Voges) in their eleven – to capitalise on the pre-Narine phase of the innings.

However, an outstanding spell of bowling from 19-year old spinner Kuleep Yadav, playing just his second match for KKR, following his debut against the Lahore Lions on Sunday, neutered the Scorchers’ hopes of dominating the first-half of their innings. Yadav’s 3-21 from his four overs bowled in three separate spells (one-two-one) regularly punctured the Scorchers momentum and when Narine was reintroduced for his final three overs with five remaining Perth had stuttered to just 106-2.

Simmons and Voges did lay a solid platform for the Scorchers, putting on 68 for the first wicket—the highest opening partnership against KKR this year. However, the early run rate never put much pressure on the Knight Riders who were allowed to dictate the majority of proceedings making myriad bowling changes during the Powerplay, and although Simmons struck 17 off the eighth over bowled by Piyush Chawla, he clearly felt the innings needed more impetus when he charged down the pitch towards Yadav in the ninth, who fired the ball wide outside off-stump—Simmons weaker wing—and was stumped.

The fragility of the Scorchers’ batting was exposed by the caution of Voges and Mitchell Marsh who scored just 13 runs off 17 balls, including 9 singles before Marsh, like Simmons before him, was stumped off the bowling of Yadav.

For the briefest of moments it looked as if the Scorchers might get away with their shallow batting as wicket-keeper and number four Sam Whiteman intelligently swept Narine from well outside off stump for a four and a six in the fifteenth over just as Perth needed to accelerate. However, Narine pushed the ball after the six wider still and Whiteman could only get a thick top edge on his third sweep of the over that was well caught by Surayakumar Yadav in the deep.

Voges was the only Scorchers batsman to offer resistance to KKR’s spin-web, his 71 not out that anchored the innings was a display of real class and considerable cricketing acumen and intelligence. But the Scorchers are just simply short of batting quality and depth, and it was no surprise when the middle and lower order subsided to Narine’s mastery. 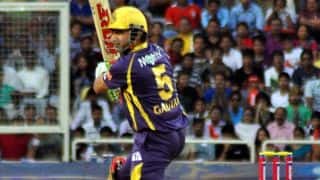