Warrier dismissed KV Sasikanth, Karn Sharma and SK Ismail in the final over to claim a memorable win at Vijayawada.

Warrier dismissed KV Sasikanth, Karn Sharma and SK Ismail in the final over to claim a memorable win at Vijayawada.

Chasing 161, Andhra required 10 runs to win in the final over with three wickets in hand. Kerala captain Sachin Baby handed over the ball to the 27-year-old Warrier. (ALSO READ: Another century for Ishan Kishan as Jharkhand sail to third straight win)

Warrier gave a single in the first ball to bring Sasikanth on strike. In the next delivery, Sasikanth was dismissed for 11 after he was caught by Vinoop Sheela Manoharan. Karn Sharma was the next to depart for a golden duck after he was caught by wicketkeeper Mohammed Azharuddeen for a duck. On a hat-trick, SK Ismal couldn t handle Warrier s pace and gave another catch to the keeper which triggered wild celebrations in the Kerala camp. (ALSO READ: Shreyas Iyer slams second century, Mumbai thrash MP by 8 wickets)

Earlier, after opting to bat, Vishnu Vinod top scored with 70, which including five smashing boundaries and two sixes in 61 balls to vindicate his skipper s decision. Captain Baby and Arun Karthik contributed with a nice cameos at the end to take the total to 160/6. Baby carted five boundaries in his 24-ball 38 knock, while Karthik tonked two boundaries and a solitary six in his 19-ball stay at the crease that yielded 31 runs. 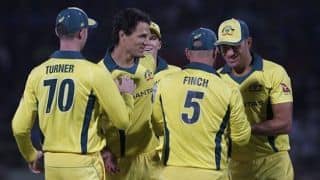 Amla out, Ngidi back for first three Sri Lanka ODIs