The win takes Haryana to the No. 3 spot, while Odisha have slipped to the sixth place.

Haryana registered their second victory and moved to No. 3 after a comprehensive 10-run victory against Odisha in a Group D Round 2 match of the Syed Mushtaq Ali 2019 tournament on Friday.

Put into bat, Haryana folded for 141 which was not such a dauting target for the opposition. Left-arm spinner Pappu Roy and fast bowler Suryakant Pradhan were the pick of the bowlers with three wickets each.

Haryana were off to a poor start. They lost opener Treyaksh Bali to Pradhan for just 1 in the second over. No. 3 batsman Chaitanya Bishnoi added 14 before he was dismissed by Rajesh Mohanty. Himanshu Rana was unable to capitalise on his start after smashing couple of boundaries and a six and fell to Roy for 25 off 20. (ALSO READ: Gaikwad, Himganekar star in Maharashtra s eight-wicket win)

From thereon, it was a downward spiral for Haryana with none of the other batsmen registering significant contributions. Nitin Saini was the next highest scorer with 22.

Roy, who has been a bright prospect for Odisha, returned with exceptional figures of three for 9 in his four overs, while Pradhan went for 31 in 3.5 overs.

Chasing 142, pacer Ajit Chahal struck first blood as Odisha found themselves with both their openers in the hut for 30 in the eighth over. Captain Subhranshu Senapati departed for just 1 after he was sent back by Sumit Kumar. (ALSO READ: Ricky Bhui, bowlers lead Andhra to record win)

Odisha were brought back into the game, courtesy Biplab Samantray and Arabind Singh, who stitched 79 runs for the fifth wicket. The dangerous partnership was broken after Samantray fell two runs short of his half-century off just 28 deliveries which included five towering sixes. Arabind (34 off 30) then shouldered the responsibility, but his valiant effort saw Odisha fall 10 runs short. 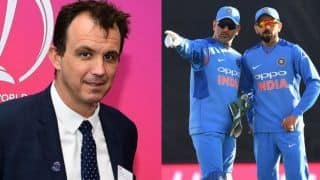