Goa lost their tie versus Kerala by 9 wickets.

A superb ton by India discard Karun Nair and a four-wicket haul by leggie Pravin Dubey helped Karnataka end Tamil Nadu‘s winning streak with a 78-run win in the Syed Mushtaq Ali Trophy South Zone T20 tournament here today. Nair’s knock of 111 was instrumental in Karnataka posting 179 for 9 in 20 overs after being sent in to bat by Tamil Nadu skipper Vijay Shankar. Tamil Nadu was bowled out for 101 in 16.3 overs.

No other Karnataka batsman crossed 20 even as Nair, who opened the innings, smashed eight fours and eight sixes in his 52-ball effort. The only significant partnership was the one between Nair and R Samarth for the third wicket, which yield 83 runs. The centurion kept going despite the team losing wickets at regular intervals.

Rookie slinger Athisayaraj Davidson with a five-wicket haul played a huge role in restricting Karnataka to 179 after they looked set for a big score at one stage. Nair was among his victims as he ran through the lower order to finish with 5 for 30.

Tamil Nadu was in early trouble during the chase, losing opener Abhinav Mukund (1) and the prolific Dinesh Karthik (0), who had scored three successive fifties, to a run-out in the first two overs. Despite a 48-run partnership between Washington Sundar (34) and Shankar (20), things went downhill for Tamil Nadu after they were separated.

Dubey, who ended Sundar’s stay, took three other wickets including that of the aggressive N Jagadeesan (16) to send Tamil Nadu hurtling to defeat.

Goa has lost all its matches. 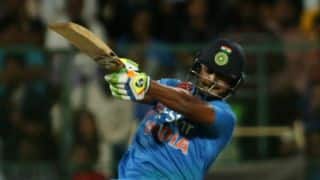 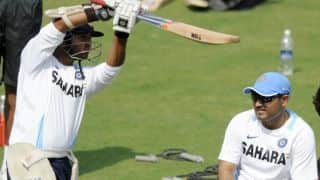