Mizoram succumbed to yet another embarrassing defeat in their maiden Syed Mushtaq Ali Trophy 2019 campaign.

Mizoram succumbed to yet another embarrassing defeat in their maiden Syed Mushtaq Ali Trophy 2019 campaign after losing to Odisha by nine wickets in Cuttack on Sunday.

After opting to bat first, Mizoram folded for 91 in 19.1 overs. Captain Taruwar Kohli top-scored with 37 off 38, hitting six fours. The next best came from Sinan Khadir who hit two fours in his 20-ball 17. The rest failed to touch double-digit score as with extras being the third best contributor with eight runs.

Pappu Roy was the pick of the bowler with figures of 3/8 from four overs while Rajesh Mohanty took 2/12. Suryakant Pradhan, Debabrata Pradhan and Biplab Samntray chipped in with a wicket each.

In reply, Odisha lost opener Swastik Samal (0) off the second delivery of the chase but that turned out to be a mere blip.

Sandeep Patnaik scored a brisk half-century to lead the successful run-chase in the company of Rajesh Dhuper.

Patnaik struck an unbeaten 54 off 39 with the help of eight fours and a six while Dhuper scored 38 not out, an innings that featured five fours.

Odisha overhauled the target in 12.5 overs finishing on 95/1 for their first win of the ongoing season.

For Mizoram it was their third big defeat after losing the opening match to Bengal by 159 runs and the second by 131 runs to Assam earlier. 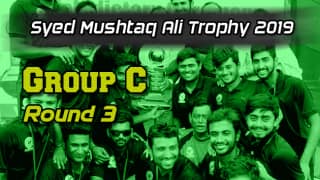