Gujarat notched up their first win of the Super League stages of the Syed Mushtaq Ali Trophy 2019, beating Railways by seven wickets in their third game at the Emerald High School Ground, Indore on Monday.

After restricting Railways to just 110/9, riding on India international Piyush Chawla’s 3/12 in four overs, Gujarat knocked off the runs with 35 balls remaining.

Piyush Tanwar top-scored for Gujarat with an unbeaten 55 off 43 balls and played anchor in the chase, combining for stands of 68 with Parthiv Patel (25), 20 with Chirag Gandhi (10) and 23* with Axar Patel (20*), after the team had lost skipper Priyank Panchal for a first-ball duck. During his knock Tanwar hit five fours and two sixes. For Railways, Anureet Singh, Manjeet Singh and Ambikeshwar Mishra claimed one wicket each.

Earlier, after opting to bat first Railways lost opener Mrunal Devdhar off the first ball off the match to pacer Arzan Nagwaswalla. Tejas Patel then removed the wickets of Gandhar Bhatawadekar for 16.

Chawla claimed his first victim of the match in the form of Amit Chopra for two and with the run-out of Prashant Awasthi (1) and wicket of PRatham Singh (15), taken by Karan Patel, Railways slumped to 36/5.

Amit Paunikar added 23 off 24 while Anureet made 12 off 17 to take their team past the 50-run mark, but another run-out in the form of Paunikar derailed Railways again, before Harsh Tyagi’s unbeaten 32 off 34 balls helped Railways got past the 100-run mark.

Chawla added the scalps of tail-enders Amit Mishra (4) and Manjeet (0). 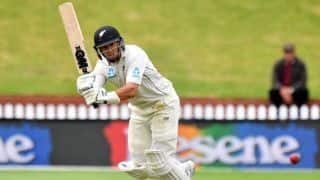 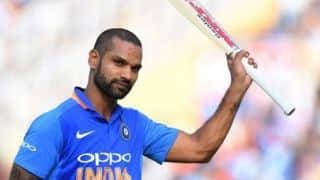