Uttar Pradesh registered an easy 77-run win that helped them climb to the top of the table in Group E with 12 points in four games.

UP registered an easy 77-run win that helped them climb to the top of the table in Group E with 12 points in four games. (ALSO READ: Assam stun Bengal to climb to second spot)

Opting to bat first, UP openers were off to a brisk start with Upendra Yadav and Samarth Singh adding 48 runs in 5.2 overs. Samarth was the first to go for 29 off 17 balls, cleaned up by Vikneshwaran Marimuthu. Suresh Raina failed to get going scoring just 12 off 18 balls before falling to Parandaman Thamaraikannan. But, during his knock Raina became the first Indian player to score 8000 T20 runs in his 300th match – which made his the second to the feat after MS Dhoni. (ALSO READ: Chhattisgarh win high-scoring thriller against Haryana)

Garg then added 58 runs with Yadav, who was removed by Marimuthu for 36 off 37. Skipper Akshdeep Nath also went cheaply for seven, but Garg found support in Rinku Singh, who scored 29 off just ten balls to take UP to a formidable total. During his 30-ball knock Garg hit six fours and two sixes.

For Puducherry Marimuthu claimed 2/15 in his four while Pankaj Singh and Thamaraikannan took one wicket each.

In chase, Puducherry were rocked early with Saurabh claiming opener S Karthik (0) and Marimuthu (2), sandwiched between the run out of skipper Damodaren Rohit for (3). Paras Dogra and Thalaivan Sargunam steadied the innings with a 37-run stand but Dogra was taken by Ankit Chaudhary, followed by the wicket of Sargunam by Saurabh three runs later.

Saurabh proceeded to take his fourth wicket in the form of outstation player Ralphi Gomez for two before Fabid Ahmed and Thamaraikannan put on an unbeaten 55 runs for the seventh wicket as Puducherry finished at 102/6. 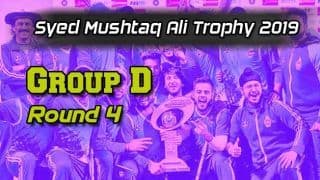