Delhi outclassed the wooden spooners of North Zone in all departments, never taking their foot off the pedal while chasing a paltry target of 101 in 11.3 overs.

New Delhi: Former captain Rishabh Pant made short work of a below-par Jammu and Kashmir with a 33-ball- 51 as Delhi won their second Syed Mushtaq Ali T20 match by eight wickets. Delhi outclassed the wooden spooners of North Zone in all departments, never taking their foot off the pedal while chasing a paltry target of 101 in 11.3 overs. Among the Delhi bowlers, left-arm spinner Pawan Negi (3/27 in 4 overs) was the most successful.

Rishabh hit a couple of straight sixes, including one off opposite number Parveez Rasool, which landed on the top-most tier of the Feroz Shah Kotla stand. He also pulled the medium pacers with disdain, hitting seven boundaries while adding 84 in nine overs with the controversial Sarthak Ranjan, who got a reprieve before making 31 off 20 balls.

Interestingly, Ranjan was sent to open against the weakest team in the zonal leg, replacing last match’s half centurion Dhruv Shorey, who reportedly had an ankle injury. Senior opener Gautam Gambhir, for only the sixth time in his 276-match T20 career, did not come to open the innings as Ranjan was given that opportunity.

He did hit three boundaries apart from two sixes. The first of the two sixes was a catch that was taken by the fielder at long-on, but he crossed the boundary ropes after losing his balance. Meanwhile, in the other match of the day, Haryana notched up their first win, beating Punjab by five wickets.

Batting first, Punjab scored 134/9 in 20 overs with Mandeep Singh contributing 30 off 18 balls, while Yuvraj Singh was dismissed by India discard Jayant Yadav. In reply, Haryana reached the target in 17.5 overs despite a tight spell by skipper Harbhajan Singh (2/16 in 4 overs). 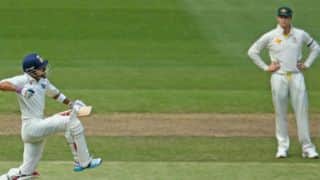 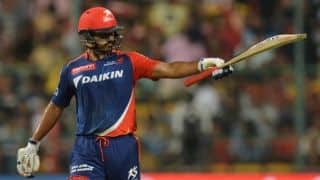