Durham and Worcestershire registered wins in their respective matches in T20 Blast 2019.

Openers D’Arcy Short and Graham Clark led Durham to an easy victory over Leicestershire with their 118-run partnership at Chester-le-Street on Wednesday in the Vitality T20 Blast. Asked to chase down a target of 143, Short and Clarke started cautiously before the Australian opener stepped on gas. He smashed Will Davis for 15 in third over and then welcomed back Gavin Griffiths with four back-to-back fours in his second spell.

Short was leading the charge early on in the chase with Clark playing second fiddle. Durham went past the 100-run mark in the ninth over before Callum Parkinson bowled Short for 70. His dismissal slowed down the run-rate, but Durham achieved the target with ease for the loss of two wickets.

Earlier, Leicestershire’s quest to put up a big total, after being put in to bat, was marred by regular wickets that they lost despite a 48-run partnership between Harry Swindells (29 of 20) and Mark Cosgrove (18 of 21) at the top of the order. Colin Ackermann (52 off 41) played a good hand, but lacked support from the other end. Lewis Hill (0), Harry Dearden (13), Arron Lilley (10) fell cheaply.

Ackermann’s effort during the middle overs saw Leicestershire manage 142/7 but in the end with Durham got over the line with 32 balls to spare.

Wayne Parnell shone with the bat in Worcestershire’s two-wicket win over Derbyshire at New Road, Worcester against Derbyshire. En route to chasing down 157, Parnell smashed an unbeaten 81 off 46. His aggressive knock included seven sixes and two fours.

Worcestershire did not have a good start to the chase as they lost the wickets of Martin Guptill (15), Riki Wessels (4) and Callum Ferguson (6) inside the first six overs. All that Parnell required was a little support from other end to do the job.

Ben Cox (20 0ff 19) and Ross Whiteley ( 20 off 13) complemented Parnell well with Cox adding 57 runs for the fourth wicket with the former South African allrounder, while Whiteley stood there for 49 runs to put their side on brink of a unlikely win.

Ravi Rampaul forced a brief comeback for Derbyshire with twin wickets in the 18th over but Parnell did not let the opportunity go and propelled his side to a victory with a six off the final delivery of the penultimate over. Worcestershire, with this win, climbed to the second spot in the points table in the North Group. 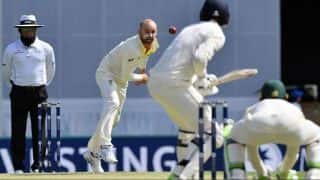